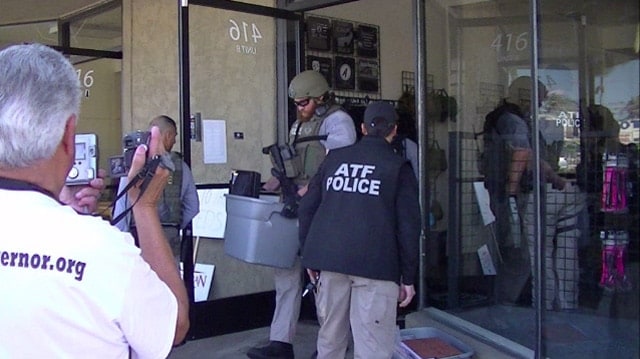 ATF agents sought to take the Ares polymer lowers and the list of 5,000 owners.

California based Ares Armor saw the ATF execute search warrants on its two locations Saturday even after a judge had granted the business a restraining order against such an action.

With its sale of EP Armory 80 percent polymer lowers being scrutinized by a new ATF determination letter that classifies these parts as firearms, Ares had earlier asked for protection from the Bureau after claiming that agents wanted not only the gun parts in question but also the names of 5,000 customers in the company’s database.

U.S. District Judge Janis Lynn Sammartino granted an ex parte application order to the ATF Friday afternoon, which set the stage for Saturday’s raid. The order set aside the Temporary Restraining Order (TRO) and prohibits Ares Armor from taking any steps to “destroy, transfer, sell, or otherwise divest themselves” of the polymer lower receivers in its inventory. In an ex parte filing, the other party is not generally given an opportunity to oppose an action or even given notice that it is being asked for.

With the court order in hand, the ATF was eligible to proceed with a search warrant from the U.S. Magistrate for the lowers in question, as the TRO did “not restrain lawful criminal proceedings.” The ATF delivered the search warrant Saturday.

“The ATF did execute a search warrant against all of our buildings today. None of our employees have been detained or arrested. We will be open for business tomorrow. We will be back up and shipping out orders on Monday,” wrote Dimitrios Karras, CEO of Ares Armor on the company’s Facebook page Saturday.

The warrants were delivered against Ares’ National City and Oceanside locations, and in turn the ATF removed some equipment and disrupted business, store officials said.

Footage taken by bystanders and posted on YouTube shows armed ATF agents in raid jackets searching the store, taking a sledgehammer to a safe, and removing unknown items in plastic tubs.

The ATF maintains that the EP Armory lowers are firearms and not gun parts.

“Ares Armor is part of ATF’s investigation because it is in possession of approximately 6,000 of these unserialized AR-15 lower receivers,” wrote Laura Duffy, United States Attorney, in the government’s response to the TRO Friday. “Further, Ares Armor is not a federal firearms licensee, so it cannot legally engage in the business of dealing firearms, let alone ones that do not bear the required manufacturer’s mark and serial number.”

The move comes on the heels of a recent raid at EP Armory, the manufacturer of the 80 percent receivers in question. Following the March 7 raid against both the EP Armory’s storefront and its owner’s home on March 7, Ares Armor was informed that they would be the subject of a coming warrant as well. This led Karras and his lawyer to file for the TRO that was granted on March 11 to prevent such a raid on Ares.

The ATF is required by Sammartino’s order to file a response to Ares Armor’s original TRO by Monday morning and the hearing on that order is still set for March 20.

“We wholeheartedly believe that they are wrong in their actions and we will be relentlessly pursuing remedy through the courts,” posted Karras on Facebook. “This is just the beginning!”