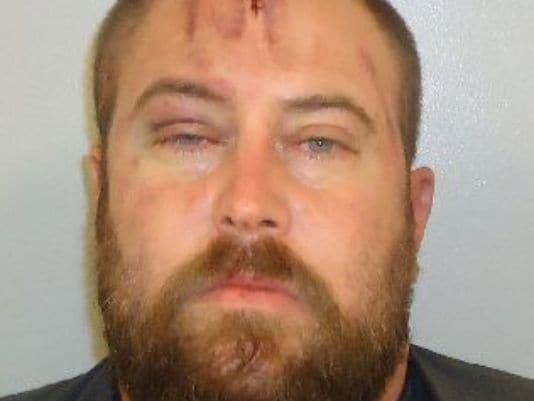 A Florida man entered a Palm Coast bar dressed like the fictional hero “Rambo”. Equipped with knives and a machine gun, he got into a near deadly fight Saturday night.

Investigators know Noble was drinking at the bar Saturday, left and later returned, but they are unsure about what caused him to return equipped with hunting knives and an Uzi. Patrons said he was also dressed like “Rambo” and challenged people to fight.

As Vassili Mironov, 28, and Roman Dubinsechi, 23, tried to wrestle the gun out of his hands, Noble opened fire and two rounds struck the floor. The men managed to get the gun out of Noble’s hands, but then he took out a knife and cut them.

Before being rendered unconscious by the two “Good Samaritans,” Noble managed to slash his own face, as evidenced by his mugshot.

Dubinsechi sustained cuts to his arm and refused medical treatment and Mironov was stabbed in his left eye and had lacerations on both hands. He was transported to a nearby hospital for treatment.

Noble is being held on no bond for attempted murder and $20,000 bond on each additional charges.