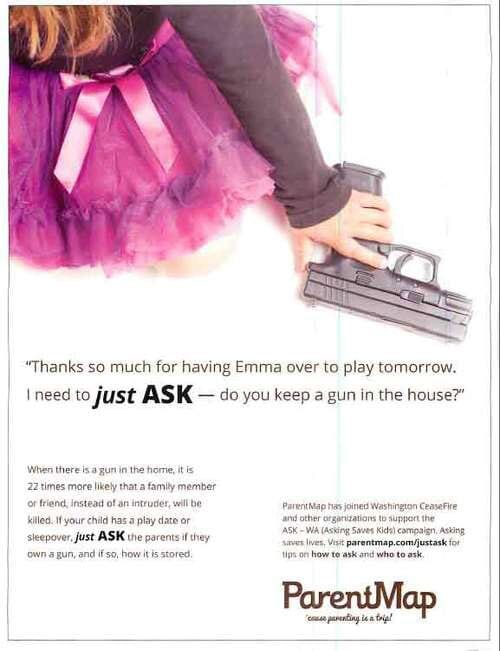 The full-page ads to be run in ParentMap are just a small portion of Washington Ceasefire’s 200-ad campaign to reduce gun violence. (Photo credit: ParentMap)

Billboards being posted on city buses in Washington by the group Washington Ceasefire are asking residents to “just ask” about gun ownership among friends and neighbors, but the ads aren’t sitting well with everyone in the state.

The group started posting the ads last week and they’ll run through April 7, local media reports.  In addition, the ads were also scheduled to run full-page in the ParentMap, a Seattle-based magazine for local parents.

According to its website, Washington Ceasefire is “dedicated to reducing gun violence,” and called the operation “the most aggressive anti-gun campaign in their history” when they, along with ParentMap, announced the plan to post the ads back in January.

The group has spent over $10,000 on 183 of the ads, which are displayed on both the inside and outside of the Metro bus line buses, although Community Transit refused to run the ads and Pierce Transit is still debating whether or not to place the billboards on its buses.

The group, which claims that a person is 22 times more likely to shoot a friend or family member than an intruder if they have a gun in the house, says the ads will save lives, particularly the lives of children.

“It’s about asking parents about their neighbors where there kids play. Is there a gun in the house?” said Ralph Fascitelli, president of Washington Ceasefire.  “We see this as a public safety and public health issue.”

However, Dave Workman, who writes a Seattle-based gun rights column and is author and senior editor at TheGunMag.com, told local media, “It’s not a public health issue, it’s a civil rights issue.”

“We’ve got a board member whose 12-year-old daughter found a gun in a neighbor’s house and she ended up dying because of it,” Fascitelli said in January. “If you’re a parent, you certainly have a right to get all the information on your side to protect the safety of your child.”

While nobody is arguing that parents certainly have the right and responsibility to know about the homes in which their children are playing, not everyone is convinced that the billboards are just about keeping children safe.

“The second part of their campaign is to tell people, ‘Don’t send kids to people’s houses that have guns,’” said Alan Gottlieb, founder of the Second Amendment Foundation. “They want to demonize gun owners so their kids can’t play with our kids.”

“We’re all for child safety,” Gottlieb added. “And most gun owners take very great precaution when it comes to child safety. Gun owners are extremely cognizant of the fact that children and guns don’t necessarily mix.”

However, Alayne Sulkin, publisher and editor of ParentMap and mother of three, said she’s had the conversation before and it’s not just about whether or not a person is a gun owner but rather that the gun is stored safely.

“You have to just ask. I don’t mean to offend anyone, but I have to just ask, ‘do you have a weapon in your home?’ That’s okay if you do; I just need to know that it’s safely stored,” Sulkin said.

Nonetheless, Workman says the ads are a waste of money.

“Those kinds of ads have never proven to be effective.  Doesn’t change anyone’s opinion,” he said.