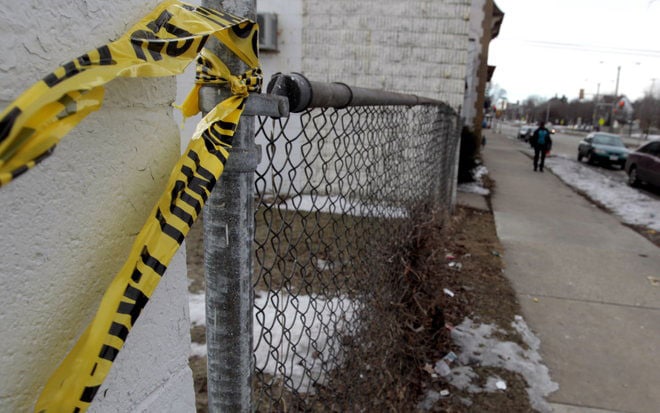 A store clerk working next to the apartment building told reporters that the area could be dangerous and, in fact, the store where he works was robbed just the day before the shooting occurred. (Photo credit: Journal Sentinel)

A maintenance worker spent two nights in jail after he fatally shot two teens involved in brutally beating him with a baseball bat last Wednesday in the stairwell of the apartment building where he works. Some are outraged over the idea of the man facing possible homicide charges for what they believe was a straightforward act of self-defense, while others are upset over the shooting death of the two teens involved.

The afternoon of the incident in question, the 39-year-old maintenance worker, whose name has not been released, was changing the locks on an apartment in which the resident was being evicted when three suspects happened upon him.

“Apparently, these people were mad that a friend of theirs was getting evicted.  They thought – apparently – that he was the manager,” Bob Braun, who lives in the apartment building and is a friend of the maintenance worker, told a local Fox affiliate the day after the incident occurred.

Apparently the trio was so outraged that two of them held the man down while the third began beating him with a baseball bat. It was at that point that the man, who has a valid concealed carry permit, pulled out his legally owned handgun and shot two of the three suspects.

A man who was at a nearby furniture store told reporters that he went inside when he heard the commotion, but when he heard screams he ran to the apartment building where he saw two of the suspects, 17-year-old Anmarie Miller and 19-year-old James Bell Jr., lying in the stairwell. The man said the maintenance worker’s face was covered in blood and he looked confused.

Miller and Bell, who were a couple with two small children, were pronounced dead at the scene.

The maintenance worker was transported to a local hospital where he received treatment for the injuries he sustained during the attack.

But once released from the hospital, the man was taken to the Milwaukee County Jail where he faced two possible counts of first-degree intentional homicide.

The third suspect involved in the beating, a man in his early 20s whose name has not been released, was also taken into custody for a possible substantial battery charge. 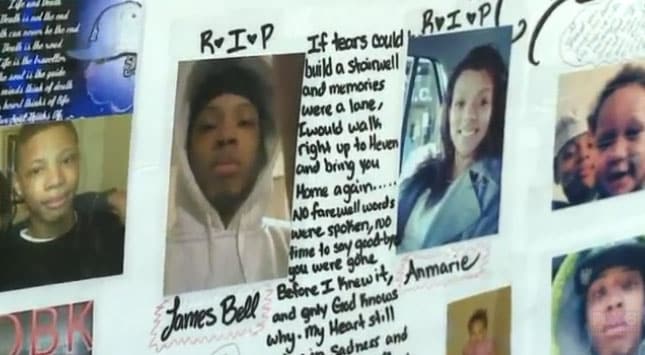 A vigil was held for the teens who were shot, as community leaders called for change and an end to violence. (Photo credit: Fox)

However, on Friday, two days after the incident, both the victim and the suspect were released from jail. Neither man are charged at this point, but the investigation is ongoing. Ultimately the decision to press charges – against either individual – will come from the District Attorney.

Meanwhile, friends and family of the teens held a vigil Thursday evening outside of the apartment building where they were shot and killed. Not all of those acquainted with the teens are sure of the events which transpired leading up to their deaths.

“He wasn’t a bad kid. It’s just – everybody makes bad decisions in their life. Things don’t go as planned. I wish the outcome would’ve been better,” said Devonte Coleman, a friend of Bell.

Joseph Hearns Jr. came to the scene of the shooting Wednesday in an effort to get some answers.

“The young man was my nephew’s son, and she was his baby’s mother,” Hearns said, adding, “I heard so many sides of it so I’m not sure what to believe at this point.”

However, authorities confirmed that the entire incident – the beating, as well as the shooting – was caught on video, which is being reviewed as part of the investigation.

David Guerrero, Miller’s cousin, told reporters that he’s hoping the video can be looked over to “get some answers.”

“She has two babies and it’s just – she won’t be there now,” Guerrero said. “We will help support those children. I lost a family member, and that’s all my concern is right now.”

And while authorities aren’t commenting on either charges or a possible defense while the investigation is ongoing, some say it’s just a simple case of self-defense. There’s even rumors of the possibility of invoking the Castle Doctrine as a means of defense since the maintenance worker was at his place of employment when the incident occurred, deeming it suitable that the shooting would fall under that statute.

“In all self-defense situations, a person may use that degree of force necessary to repel the force against them,” said local attorney Alex Flynn. “The Castle Doctrine says you can use force presumptively if it’s your home, car or business. Now, this is where he worked,” he added.

“As we get to the bottom of both the assault and the shooting, we’ll determine what the appropriate outcome is,” said Milwaukee Police Chief Edward Flynn.