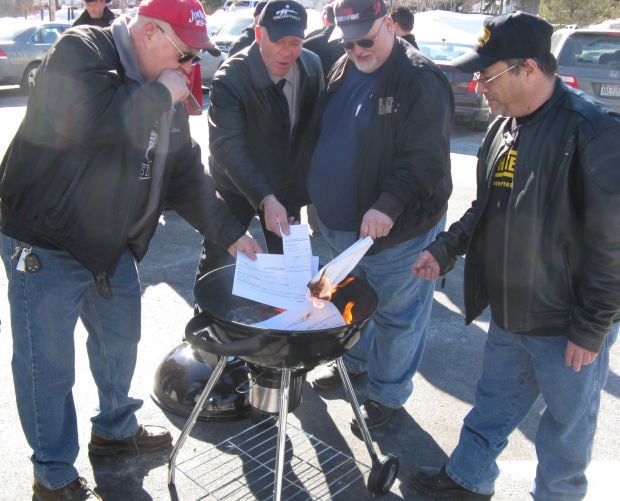 These forms are the ones used by the New York State Police to add firearms classified under new legislation to a registry of so-called ‘assault weapons’ in the state. The SAFE Act, implemented in 2013, mandates that all such guns be registered by April 15.

“We’re basically explaining to people once they register, that gun is no longer theirs,” said Lisa Donovan, one of the organizers of Sunday’s rally.

“It’s a matter of time as to when the state will take it … It will be upon their death or when they change the law and decide to confiscate the guns that have been registered,” she continued.

In a show of civil disobedience, nearly a thousand unfilled NYS Police Assault Weapons Registration  forms (pdf) were burnt in a barbecue grill at the rally. Organizers of the event say that the crowd Sunday numbered several hundred.

The event also featured a raffle for an AR-15 and lessons on modifying guns currently classified as ‘assault weapons’ in the state so that they would not have to be registered.

The rally, held by the NY2A Grassroots coalition was conducted at the Saratoga-Wilton Elks Lodge. NY2A conducted the event as part of their “Keep Calm and Register Nothing” campaign advocating non-compliance with the state mandated registry.

“We are opposed to registration because the evidence is clear that registration leads to confiscation,” said NY2A co-founder Jake Palmateer.

Palmateer estimates that less than 3,000 New York ‘assault weapons’ have been registered in the state so far while estimates of the number in the Empire State are as high as 1.2 million, and gun makers are busy tweaking existing designs to circumvent the ban entirely.

NY2A plans several more rallies against registration between now and the April 15 deadline.