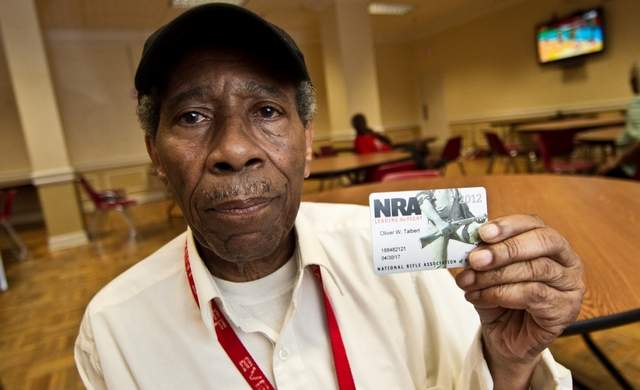 Oliver Talbert, 74, who lives in the Wilmington Housing Authority’s Park View complex, displays his NRA membership card. He got it about a year ago when a friend of his was killed in a home invasion. (Photo credit: Robert Craig, The News Journal)

A ruling by the Delaware Supreme Court struck down existing policies prohibiting guns in common areas of the Wilmington Housing Authority as unconstitutional.

“Delaware has a long history, dating back to the Revolution, of allowing responsible citizens to lawfully carry and use firearms in our state,” wrote Associate Justice Henry Ridgely in the 27-page decision.

“Like the citizens of our sister states at the founding, Delaware citizens understood that the ‘right of self-preservation’ permitted a citizen to ‘repe[l] force by force’ when ‘the intervention of society in his behalf, may be too late to prevent an injury,” Ridgely continued.

The Wilmington Housing Authority is a nonprofit agency of the State of Delaware that provides housing to low-income individuals and families. A lawsuit by two residents appealing to the court under the U.S. Second Amendment challenged the agency’s rules on guns.

At stake was WHA’s lease policy, which stated that neither residents nor guests could carry a firearm in any common area such as TV rooms and laundry areas and further had to offer for inspection any firearms permits held by household members to the agency.

Residents were subject to eviction if they, their household members, or their guests violated the lease provisions and rules. Since the WHA for many was the only affordable local housing option, eviction could mean homelessness.

To both of these issues, the court answered that the WMA could not legally require either as a matter of policy.

The court noted that the Common Area Provision was “overbroad and burden the right to bear arms more than is reasonably necessary … by functionally disallowing armed self-defense in areas that residents, their families and guests may occupy as part of their living space.”

In the response to the requirement to produce firearms permits by occupants, the court likewise concluded that the only reason to do so was to satisfy the Common Area Provision and thus unconstitutional as well.

“It is definitely a win,” said attorney Francis G.X. Pileggi, who represented two WHA residents in the suit. “The result is excellent and exactly what we were looking for.”

WHA officials however, are not as pleased.

“Overall I think the ruling sets us back,” said WHA Executive Director Frederick S. Purnell, who was named as the defendant in the NRA-funded lawsuit.

Although the Delaware Supreme Court has transmitted the case automatically to the U.S. Third Circuit, the WHA does not plan to appeal the decision and will move to change its policies.