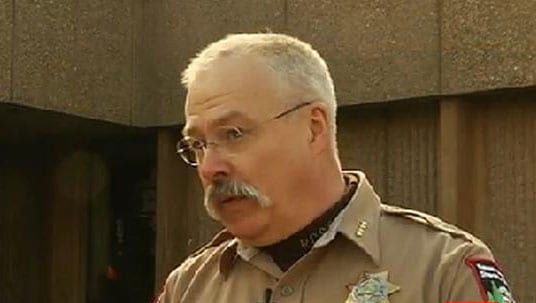 An intruder was fatally shot by a homeowner in Montana after he was caught breaking into the man’s home early Monday morning.

Local media reported that the homeowner, whose name has not been released, was awakened just before 4:00 a.m. by unfamiliar noises in his Corvallis home, about 30 miles south of Missoula. The man said that at first he thought the sound was just snow falling from the roof, but as the noise continued, he realized it was something else.

When the homeowner went to see where the noise was coming from, he found a man had broken a window to gain access inside in what police believe to be an attempted burglary. The homeowner was armed with a handgun and demanded that the suspect remain still.

However, according to a report by the Ravalli County Sheriff’s Office, the intruder then turned and began to come towards the homeowner in a threatening manner. That’s when the homeowner opened fire, striking the suspect, who then crawled back out of the window which he had entered through and ran off.

Police responded quickly and after a brief search found the suspect lying on the ground near the home. Paramedics were also in the area at the time and arrived within minutes. Efforts to revive the suspect failed and he was pronounced dead at the scene.

The suspect was later identified as 39-year-old Tobias Ian Bishop of Missoula and apparently had a long criminal history, which expanded over at least two other states and included burglary, assault and drug-related arrests.

Bishop also had active warrants for theft and forgery charges. Prior run-ins with law enforcement indicated that he was prone to violence. Ravalli County Sheriff Chris Hoffman said that they believe the man was involved in at least one other nearby burglary that morning.

The incident is still under investigation and no charges are expected to be filed against the homeowner.

In 2009, HB 228 expanded the rights which fall under the Castle Doctrine, but Hoffman said it’s too early in the investigation to determine whether or not the homeowner will be protected under the state’s Castle Doctrine or whether a different statute would apply in this particular case.

“First of all, I have no idea yet if the castle doctrine law is germane to this incident,” Hoffman said. “But my interpretation is a person has every right to protect him or herself in their home if they fear for their life. They are in no obligation to hide out or call 911. If they are in fear for their life, they have every right to defend themselves or use deadly force.”