Today most shooters best know the firm of Sturm, Ruger as makers of any number of affordable rifles and handguns, and for those that would base their opinion of the company solely on that reputation.

It may come as a surprise to find that the company also makes a love-it or hate-it “superposed” over and under shotgun. However, in this case you’ll have to reach for your wallet because with the Ruger Red Label, you have to pay to play. 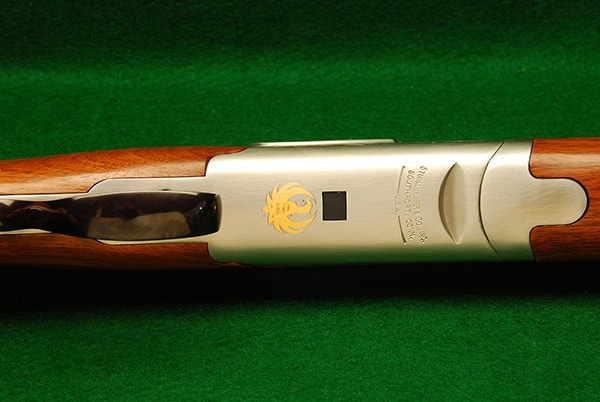 The Red Label is Ruger’s only shotgun. (And possibly there most beautiful gun).

The Over and Under Story

The problem with side-by-side double-barreled shotguns is that they have stout recoil and that their aim point is always slightly to the left and right of center.

The solution to this was the over/under shotgun in which the first barrel is directly under the second, rather than side-by-side. This type of gun proved light, effective, and extremely fast shooting on multiple targets since it has no action to work. The O/U therefore is the first choice of many upland bird hunters and sporting clays shooters.

The problem was, it’d long been elusive to find one that was made in the US.

If you want an over and under shotgun for clays or hunting today, odds are you are stuck with a European-made import.

The double guns sold by CZ-USA are produced in the Czech Republic. Franchis, Benellis and Berettas are all made in Italy. FN (who has owned Whinny for years) makes the Winchester 101 in Belgium.

Both Browning’s Citori and Weatherby’s Athena/Orion Models have been made in Japan for decades. Stoegers come from Brazil.

A. Galazan engraved Standard Grade Connecticut Shotgun Manufacturing Model A-10 Over Under Shotgun with Case.

Only three small companies specialize in these shotguns in the United States. The custom firm of A. Galazan that operates as Connecticut Shotguns makes small runs of in-house O/U’s starting at about $7K with the waiting period to match.

Then there is Kolar Arms of Racine, Wisconsin whose smokepoles start at about $13K. Finally the third American firm that makes O/Us is Silver Seitz in Maryland and, with guns starting about 20K, they make Galazans look downright affordable.

Well, in 1977, Bill Ruger decided that it was time for a US-made over and under that didn’t break the bank.

Design of the Red Label

The original Red Label came in both English and pistol stock versions. 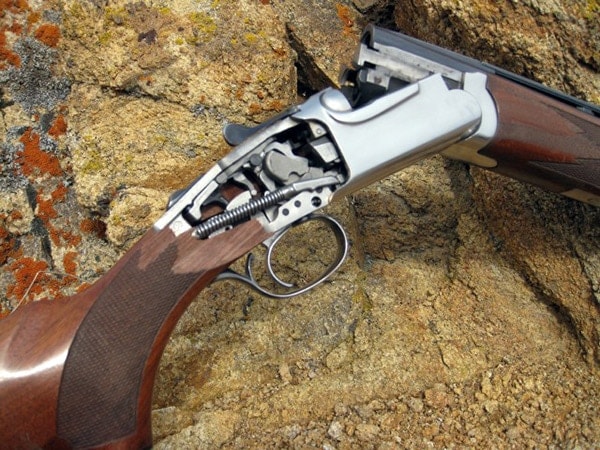 Ruger Red Label with the receiver “peeled back”.

With such legendary guns as Browning’s Superimposed to draw inspiration from, Ruger did, as they are known to do and went immediately to over engineering their new shotgun.

With a box-lock receiver CNC milled from a steel block, the gun was given a heart (and lock up) that is possibly one of the strongest of its type. Without any sort of visible screws, pins, or rivets, the receiver seemed more like blown glass than metal. Checkered American walnut furniture fore and aft provided just the right amount of old-world styling.

A pair of hammer-forged barrels made of high-strength chrome-molybdenum steel and auto-ejectors at the breech became the gun’s hood ornament.

Chambered for 3-inch shells, the double-barreled Red Label was introduced in 1977 in both 12 and 20-gauge cylinder-bore variants. The price ran higher than domestic pumps or semi-autos and less than most other O/Us on the market. 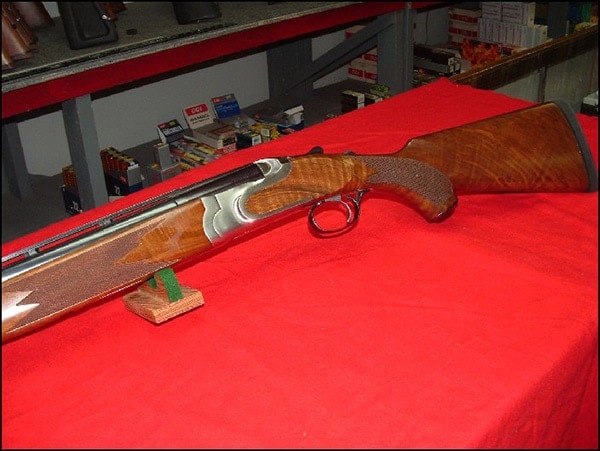 Red Label woodside. Note how the wood comes up over the receiver.

Use, changes, and a quiet death

Remember when we said that the gun was over engineered? Steel blocks, molybdenum, all that? Well this made it heavy. Sure, its 7.75-pound weight doesn’t sound like much, but when compared to the Beretta 686 Silver Pigeon (6.6-pounds) or the Franchi Instinct Sl (6.5-pounds), that extra chunk has drawn legions of Red Label haters. 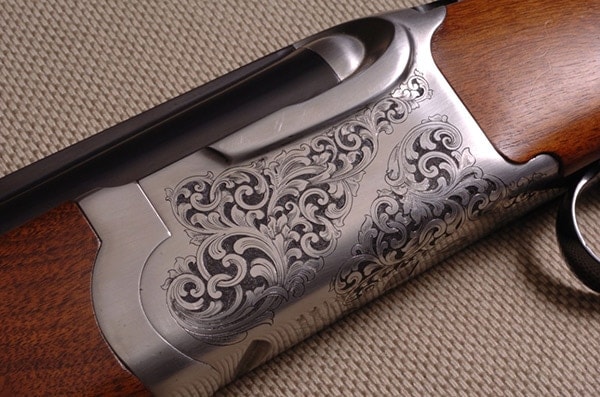 Many Red Labels have extensive engravings to give the American design a touch of that “Old World” feel.

The 20-gaugers were lighter, but still not as light as the guns from overseas. In addition, the fit and finish of the American walnut stock wasn’t quite up to the same standards that you see from the old-world master artisans from Gardone and Kochi.  Still, the Red Label saw constant improvement over a 20-year period. Choke tubes replaced cylinder bore in 1988. Strait English-style field stocks became an option after 1992 for those who disliked the pistol grips. In a move that gave the gun a certain modern panache, stainless steel receivers that looked as if it they were cast from liquid adamantium became the norm for 12 gauge guns.

Speaking of gauges, a good over and under isn’t good enough for many shooters until it comes in 28-gauge so this caliber choice was added in 1994. About that same time, the machining tolerances of the gun were improved, giving it a much better fit than on earlier models. You also saw more modern clays features like Briley choke tubes and larger (.744-inch) forcing cones appearing.

Champion series Red Label. Yes, that’s a $2000+ O/U with Dale “The Intimidator” Earnhardt on it.

The company experimented with special models like the All Weather Stainless with polymer stocks, the $2500 MSRP Hand Engraved model with Circassian walnut and semi-custom scrollwork, the Woodside that encased the receiver in walnut, and others. There was even a Champion’s series with engravings of NASCAR leaders like Dale Earnhardt inlayed into the receiver. You never saw a Beretta with that on it.

Finally, around 2010, the company started putting the gun to bed and within a year, it had dropped from its catalogs. With a MSRP of $2015 for the Standard Grade gun, imports like Stoegers and CZ’s had now coincidently become much cheaper. Heck, you can even get entry-level Franchi and Beretta scatterguns cheaper.

And it would seem the Red Label paid the price.

Between 1977 and 2011, no less than 150,000 Red Labels came from Ruger’s New Hampshire factory. By far the majority of these guns are in 12-gauge Standard Grade variants. These guns can be lucked into starting at about $700 for those that have seen some field use and have the scratches to show for it. Be aware that a late generation Red Label and one made in the 1970s are vastly different in the number of features they exhibit, which in many cases will negate the common factor of age being more desirable.

Very nice Red Labels are out there from limited editions that do have some collector’s interest and these should be considered non-shooters to keep them as such. Still, even the nicest Ruger smokepole in minty NIB condition will run under $2500.

Not content to let the premium shotgun makers swoop down and take over their niche, Ruger just recently announced the Red Label’s comeback.

The gun has some improvements (2-inch forcing cones, Briley chokes standard, MSRP of $1300). Downside is that it is only in 12-gauge and it is still heavy, but it’s an American-made O/U that is still expensive, but you don’t have to get a second mortgage to own.

This is just what Bill Ruger wanted.