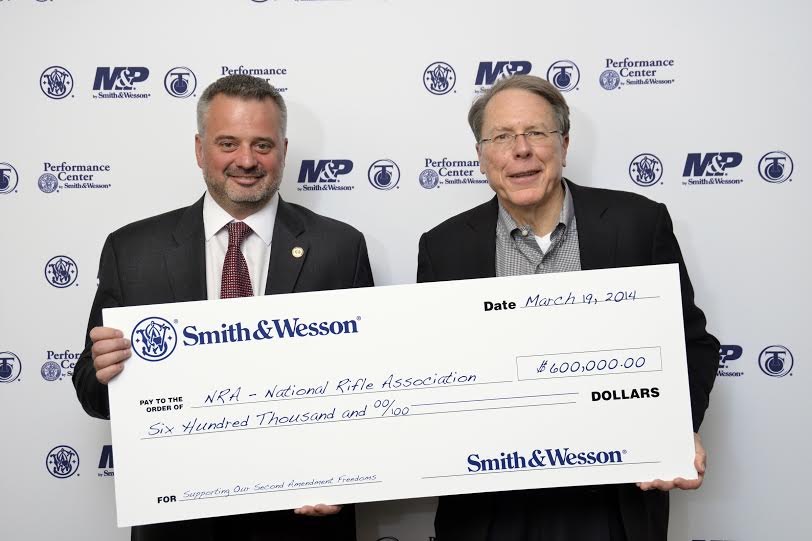 James Debney, left, and Wayne LaPierre, who, the one day in his life, forgot to wear a necktie. (Photo by Smith & Wesson)

During a visit at the Smith & Wesson factory today, the National Rifle Association’s head honcho walked away with $600,000 in donations from the iconic company and the potential for more in 2015. Next year Smith & Wesson employees will have the option of getting an annual NRA membership as a paid benefit.

”The importance of the NRA and its critical role in the protection of Second Amendment rights in the United States cannot be understated,” said James Debney, Smith & Wesson president and CEO.

Debney added, “Only by joining together, utilizing shared resources, and working toward the same objectives, will we be able to ensure the preservation of Second Amendment rights today and for future generations.”

At the factory, LaPierre, NRA executive vice president and CEO, spoke with employees about the importance of the NRA’s lobbying efforts and its programs.

“On behalf of our 5 million plus members and tens of millions of supporters, I’d like to thank the men and women of Smith & Wesson for their generous support of our fight to preserve our gun rights and hunting heritage,” LaPierre said. “Freedom needs our continued vigilance and America’s 100 million gun owners must stand and fight to preserve our liberty.”