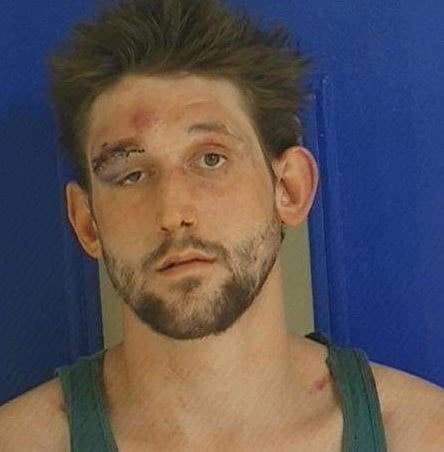 Although reports say that no one was injured during the incident, that doesn’t appear to be the case for Camron Crismon. (Photo credit: KRCR)

A burglary in progress was halted by an armed neighbor early Wednesday morning in the northern California town of Red Bluff and the sheriff’s department is appreciative of the man’s help in catching the crook.

It was about 7:20 a.m. when the couple noticed Camron Crismon going in and out of their neighbor’s home, taking items as he went.

Tehama County Assistant Sheriff Phil Johnston told a local ABC affiliate that Crismon “resides in the area and was able to case the place, decide what he wanted to take and set forth to do it.”

But apparently he didn’t count on the neighbors getting involved and when he tried to make off with a riding lawn mower, a set of golf clubs and some tools, the couple intervened. The woman called 911 while her gun-toting husband went to confront Crismon.

The man, who has a valid license to carry a firearm, held Crismon at gunpoint until deputies could arrive just a few minutes later. He was arrested and charged with burglary and vandalism.

The stolen items were recovered and returned to the homeowner, who wasn’t home at the time of the burglary.

Johnston applauded the neighbor for his part in catching Crismon.

“A citizen, a responsible citizen and responsible gun owner, had essentially detained the suspect at gun point,” Johnston said. “He operated within the law. People can intervene if they feel comfortable doing that. Obviously, this citizen had armed himself and felt comfortable taking action on his own.”

Yet although the incident turned out well, Johnston said that they don’t always recommend intervening in such a way.

“I’d like people to be good witnesses, and let us do the hard work. That’s what we get paid to do, is to respond to violent people, to people that cause crime,” Johnston explained. “The citizen did what he thought was necessary and he acted within the law and it was appropriate. His response was appropriate.”