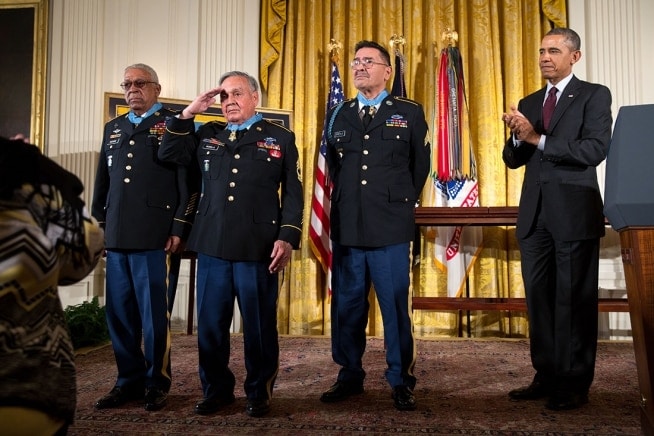 Two days after President Obama awarded 24 Army veterans the Medal of Honor, the Department of Defense announced Thursday that it will review how service members receive recognition for combat valor.

“The Department of Defense has a solemn obligation to recognize and honor service members who distinguish themselves in combat,” Secretary of Defense Chuck Hagel said in a memo. “After 13 years of war, we must use lessons learned in Iraq and Afghanistan to improve our awards program and ensure that our troops are being honored appropriately.”

The review will primarily focus on whether or not the current program adequately recognizes all levels of combat valor by assessing the nomination and evaluation process to determine such acts, said Lt. Cmdr. Nate Christensen, DoD spokesman, to Guns.com.

Specifically, the DoD will determine if award processes and authorities are properly aligned with the joint nature of warfare by asking questions such as:

Earlier this week the President awarded the Medal of Honor to 24 Army veterans for their heroic acts in combat operations during World War II, the Korean War and the Vietnam War. Nineteen of the honorees were originally overlooked for the award because of their racial or ethnic background.

While social issues may have been a factor decades ago, the current review aims to remove unnecessary hurdles. For example, the DoD evaluated the 24 honorees over a 12-year period before they received the award.

During a press conference yesterday, Pentagon Press Secretary Rear Adm. John Kirby described a conversation he had with Hagel, which explains some of the reasoning for ordering the directive.

(Hagel) was talking about his service in Vietnam, and I think — I think to be honest with you, some of his own services factored in to his — his reasoning to want to go take a look at this.  I mean, he talked about seeing his own comrades there in Vietnam doing incredibly brave things, and — and many of those things will go completely unheeded because they were never written up, because of the — the pace and speed of war, and the — and just the constant pressure to keep going.  And so many heroic acts never got — never got noticed, never got written up, never got submitted.  And I think — I think that’s also — his own personal combat experience I think is weighing into this, as well.

And when asked about finalizing a process for reviewing individual acts of valor, Kirby added:

Look, it’s not a science.  And I don’t think (Hagel is) trying to make it a science.  But he does think it’s time, after 13 years of war, to take a fresh look at how we think about this, what’s the process, can it be done better, are there seams between the services that need to be closed, or not?  But it’s — it’s — he recognizes that it’s — it is by nature and will always be a subjective process.  But I think he wants to have a better understanding of that process and — and — and the ways in which it may — it may be improved going forward.

Additionally, the review will determine how best to recognize service members who work via cyberspace or remotely but still have a direct impact on combat operations.

The latter was included since the DoD cancelled the Distinguished Warfare Medal, which was intended for combat drone operators, hackers and cyber saboteurs, shortly after it was introduced February of last year.

The acting undersecretary of defense for personnel and readiness will lead the review working with the chairman of the Joint Chiefs of Staff, military departments and combatant commanders.

The DoD’s review will begin in June 2014 and is expected to last approximately 12 months.