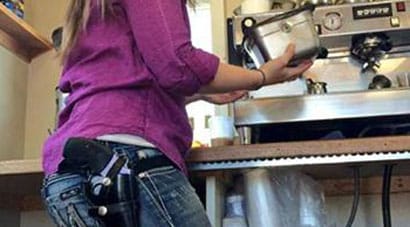 “She, no hesitation, grabs her gun, her cell phone, ducks down, backs to the back door, and calls police,” the coffee shop’s owner recalls of Sunday night’s attempted robbery which was stopped by the pistol packing barista. (Photo credit: KXLY)

A small coffee stand in Spokane, Washington, is making national headlines and attracting droves of new customers. But it’s not the delicious drinks or barely dressed babes that’s drawing all of the attention to the business, it’s the pistol packing baristas.

Jitterz Java has been targeted for robberies four times this year, three times in the past month alone. According to one report from local media, Sara Chapel, who owns the coffee shop, believes part of the reason they’ve been targeted is because at night there has only been one person working at the stand and that person is usually a woman.

Nonetheless, four times is four too many for Chapel, who has taken extra security measures to ensure the safety of her employees. She has had new window locks as well as a security bar installed on the drive thru window and is even considering adding a special type of bulletproof film to the windows.

“It’s a Kevlar carbon fiber type mix window tint that you put on your windows and it stops up to a .45-caliber bullet,” Chapel explained.

In addition, she is encouraging her baristas to take charge and arm themselves while working.

In fact, several of Chapel’s employees have already received firearm training, so she’s now scheduling at least one armed barista for each shift. But she’s also keeping a gun at the stand at all times, just in case.

“Five years ago I never thought that we would be an armed coffee stand, but I think it’s something more coffee stands need to band with us on and say, hey we’re going to stop this from being a target,” Chapel said.

Krystal Cogswell, who serves up drinks with a .38 Special on her hip, backs Chapel’s decision.

“I would rather have it and not need it, than need it and not have it,” she told reporters.

“Before I never felt an immediate threat, so I would just have it off to the side or somewhere hidden. But now I feel like if someone can see it, maybe it will just deter it right then and there and I won’t ever have to use it,” explained Cogswell, who has a photo on Facebook of her sporting her Lavender Lady while making lattes, currently with about 4,000 likes.

It’s not only her employees that back Chapel’s decision to have pistol packing baristas either.

With the exception of one man, there’s been an outpouring of support from customers.

“I only had one guy that said, ‘Whoa, maybe you girls shouldn’t have them because when you’re angry you do things you shouldn’t,’” Cogswell said, but she assured that she would not be pulling her gun on anyone, unless there was one pointed at her.

“I’d like to defend myself if the time comes,” she said.

But Chapel hopes that Sunday night’s attempted robbery, which was foiled in part by a pistol packing barista, will be the last.