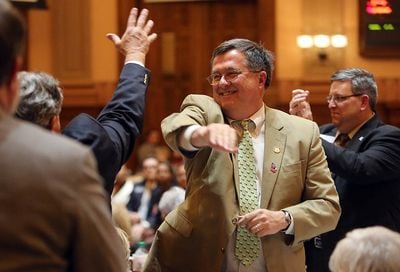 The sweeping gun-rights bill that has been winding its way through the past two legislative sessions in the Georgia state legislature passed in the last hours of the current session.

The bill, HB060, legalizes the use of suppressors for hunting in the state and allows guns in several areas that previously were off limits, such as in unsecured areas of airports.

“The House has finally come along for Georgia’s gun owners,” said Sen. Bill Heath, R-Bremen on the legislation.

House Bill 60 was introduced into the state House over a year ago before finally passing that body on Feb. 13, 2014 by a landslide 167-3 vote. Then followed a month of being passed back and forth between the Georgia House and Senate with various amendments clarifying the measure’s sections on legalizing suppressors and allowing guns in churches.

The House, sending the bill to the governor’s desk, confirmed the final version, which passed the Senate on Mar. 18 by a 37-18 vote, Thursday.

One of the few changes in the final bill from the original version included dropping language that would have allowed guns in churches. Instead, unless a church itself expressly allows guns on its property, it will remain illegal.

“Churches would have to vote on it,” said Melinda Ennis, who speaks for the Georgia Gun Sense Coalition. “The clergy didn’t ask for this and they don’t want it. They wonder why it was put on their plate to deal with when they have so many other matters of faith.”

Meanwhile. those in the firearms industry noted the bill’s inclusion of suppressors, which would now be legal for hunting in the Peachtree State.

“We are pleased by the growing appreciation by state legislators and wildlife managers of the benefits sound suppressors provide to hunters and target shooters,” Larry Keane, National Shooting Sports Foundation senior vice president and general counsel, told Guns.com Friday. “We look forward to actively supporting legislation in other states.”

Legislation backing expanded use of suppressors as well as increases in concealed carry laws have been sweeping the country in recent months. South Carolina’s governor signed a new law in February to allow carry in bars and restaurants that serve alcohol whereas North Carolina greatly expanded their concealed carry laws in 2013.

CORRECTION 3/26/2014: We originally reported that Melinda Ennis was the head of the Moms Demand Action for Gun Sense in America Georgia chapter. Ennis is currently speaking on behalf of Georgia Gun Sense Coalition.