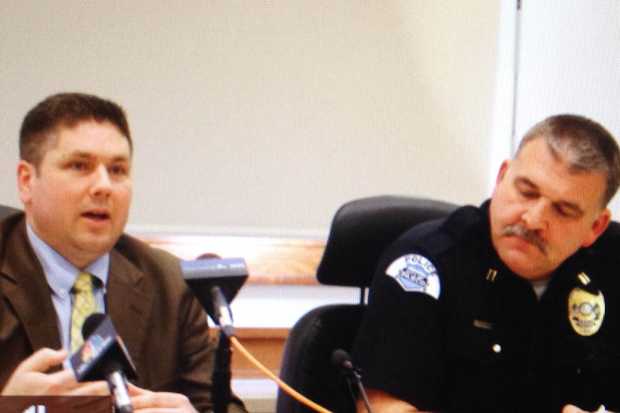 With his 9mm pistol, Rudy Ontiveros Jr. shot Stephan S. Aceves four times in the hand, chest and head while the 28 year old was apparently trying to force his way into the man’s home at 2:30 in the morning on Feb. 14, the prosecutor explained at the press conference.

According to lab tests, Aceves had a blood alcohol content level of .35 percent, more than four times the level in which one would be considered impaired under state law (.08), when he began making his way into Ontiveros’s home.

“This is a tragic incident and a reminder that alcohol is a drug and can have horrific consequences, especially at elevated levels,” Sant said.

“After a review of all the statements and evidence in the case, and in consultation with members of my office and law enforcement, it is our decision that the shooting is ruled a justifiable homicide,” he continued.

Aceves’ family told authorities that he was staying at his stepbrother’s house the night of the shooting. After going outside, they believe he got confused and mistakenly thought that Ontiveros’ home was the one in which his stepbrother lived.

The victim’s family also believes that the prosecutor was a little too quick to conclude the 4-week investigation, believing there are some questions that still need to be answered.

“It seemed to us like (Sant) based his decision completely and solely on Ontiveros’ story. That’s how it felt to us,” Donna Bush, Aceves’ mother, told the Tri-City Herald. “We had a lot of questions that weren’t satisfactorily answered. We were hoping for a different outcome.”

Meanwhile, Sant seems confident in his findings, noting that on the 911 call one can hear Ontiveros yell to Aceves to get off the property.

“Rudy states that (Aceves) forced his way into the home using his forearms to force the door open,” Sant said. “The 911 call had just connected and you can hear Rudy yell what sounds like ‘get the (expletive) out’ followed by four gunshots.”

Additionally, Sant said investigators determined that the door was open during the shooting, as several rounds hit the front of the door. Also, all four casings were found in the living room near to the front egress.

“Evidence at the scene clearly indicates that (Aceves) was shot while inside the home,” Sant said.

Yet, despite the evidence, Aceves family believes that Ontiveros, a father or four small children, pulled the trigger prematurely.

“I told the prosecutor that what he did was give free reign to everyone who owns a weapon in the community or city,” said Alfredo Aceves, the victim’s father. “I am going to tell my friends and family that come to Franklin County just to be aware that if you need help and knock on someone’s door, you will be shot four times and killed.”