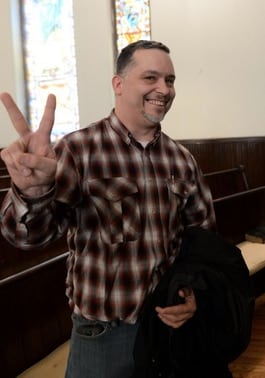 In a promotion that has been said to stir international controversy, an upstate New York church raffled off a semi-automatic rifle on Sunday.

The Grace Baptist Church in Troy, New York, giveaway its first of two Smith & Wesson M&P15 rifles yesterday, with plans to raffle off the second one on tonight at 7 p.m.

The lucky winner was of the first rifle was 42-year-old Ron Stafford, a gun enthusiast, sportsmen and hunter from Schenectady, New York.

Though he is not a member of the church, he drove 25 miles to participate in the gun drawing. Stafford, a self-identified Christian and father of two, dismissed the critics who argued that God and guns don’t mix.

“I believe it’s the right of the individual, I believe the church and our God-given rights and our rights to follow the Constitution go hand in hand,” Stafford told the New York Daily News.

“I like to shoot,” he continued. “I believe that this shows the will of the people and what this country is all about.”

Those who hosted the event were also quick to reject criticism and defend the relationship between the gospel and one’s fundamental right of self-defense.

“I think the average American does not understand. I think it’s liberal politicians who push an agenda on us. I can’t comprehend why. Why is it an issue?” he asked.

Organizers made sure that they followed the letter of the law and that the rifle was compliant with the New York SAFE Act, the sweeping gun-control law passed last year in the wake of the mass shooting at Sandy Hook Elementary School in Newtown, Connecticut.

Before transferring firearms to the winners, the gun shop that provided the rifles — the Oakwood Trading Post — will run a federal background check on Stafford and the winner of tonight’s drawing.

In addition to the federal background check, the Troy Police Department will also look into the person’s background to see if there is anything else that would disqualify them from owning a firearm. 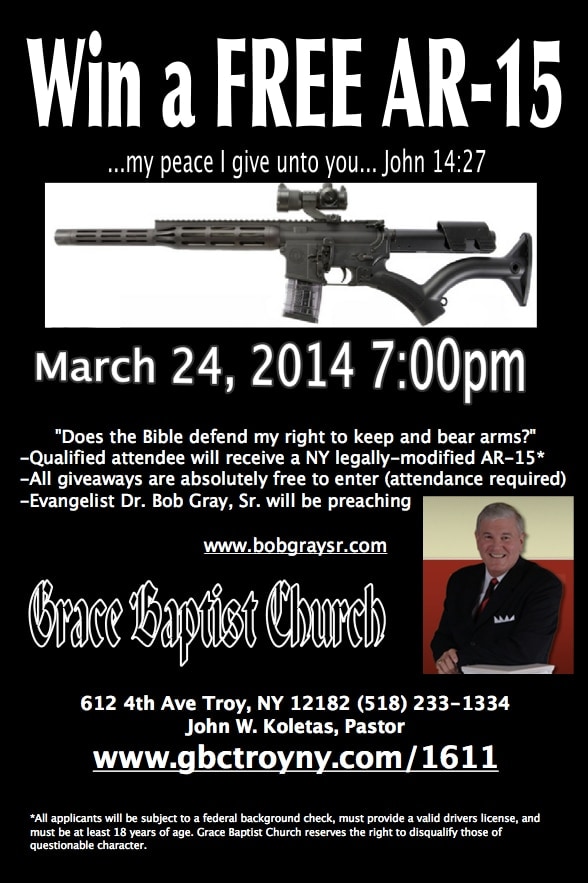 As odd as it may seem to some, this is not the first time a church has decided to reach out to gun owners in an attempt to point them to Christ.

The Kentucky Baptist Convention has been holding similar events, which they call “Second Amendment Celebrations,” at churches across the state for more than a year now.

“The day of hanging a banner in front of your church and saying you’re having a revival and expecting the community to show up is over,” said Chuck McAlister, a former pastor who now hosts many of the Kentucky-based gun raffles.

“You have to know the hook that will attract people, and hunting is huge in Kentucky,” he added. “So we get in there and burp and scratch and talk about the right to bear arms and that stuff.”