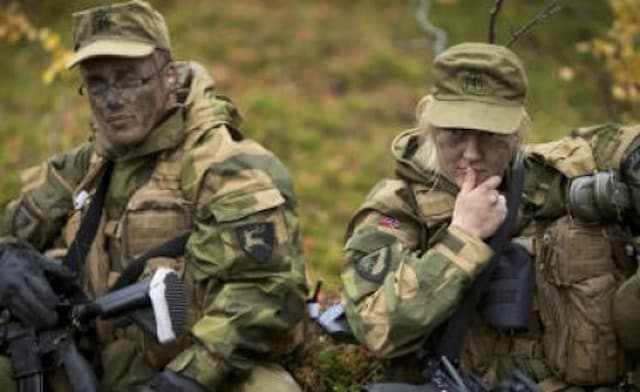 The Norwegian Army has housed male and female soldiers under the same roof on a trial basis.

The Norwegian Army is housing male and female troops under the same roof on a trial basis and says that thus far, having unisex dorms has actually reduced sexual harassment.

“You have to be a team here, and then you have to live together in order to be able to trust in one another,” she said, adding that the trial was a “damn good idea.”

Ulla-Britt Lilleaas, co-author of the report “The Army: The Vanguard, Rear Guard and Battlefield of Equality,” said the women who took part in the trial reported feeling more like “one of the boys.”

“To them there was nothing strange about the unisex rooms,” she wrote. “They had entered a common mode where gender stereotypes had disappeared, or at least they were less obvious.”

The Norwegian Army is known for its progressive attitude and has previously allowed male troops to grow out their hair as long as it’s kept in a ponytail or braid, and in 2013 Norway became the first NATO country to mandate military service from both male and female citizens.