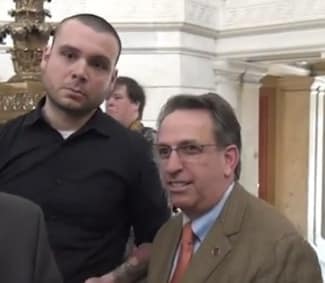 The Rhode Island state senator who told a gun-rights advocate to “Go fuck yourself” last week, following a public meeting on gun control at the State House, has issued a public apology.

After claiming that his emotions got the best of him, state Sen. Josh Miller (D-Cranston, Warwick) stated in a open letter, “Out of respect for the decorum of the State House and the constituents I represent, I offer my apologies.”

The foul language was directed at Dan Bidondi, a proud Second Amendment activist and the host of the “Truth Radio Show,” who attended the event and caught the exchange on camera.

In the video, which you can see below, Bidondi tells the pro-gun control lawmaker that “The Second Amendment shall not be infringed, you people need to understand that.”

Here is Miller’s full statement, courtesy of the Providence Journal:

Last Tuesday a vast group of Rhode Islanders gathered peacefully in the State House rotunda to voice their concerns about gun violence in our state and in our country.

They also gathered to support sensible gun legislation that would ban the sale of assault weapons, ban the sale of high capacity magazines, ban weapons on school grounds and deny firearm access to individuals who have been convicted of domestic violence misdemeanors.

At the end of a press conference in which I participated, an individual representing a website notorious for conspiracy theories started berating members of the coalition and intimidating elderly veterans, members of the clergy and victims of violence.

It quickly became a highly charged atmosphere, which required the presence of the Capitol Police. The individual in question is not new to the State House and is known for his aggressive and intimidating manner. He also was interrupting legitimate members of the media who were attempting to conduct interviews.

After watching him antagonize an elderly veteran he swung his camera my way, which produced a very human and guttural reaction. I respect both the Second Amendment and the First Amendment. It is important to note that the individual in question was physically removed from a committee room by the Capitol Police later that evening.

Regardless of the emotions and atmosphere of the moment, it does not justify the language I used that day. Out of respect for the decorum of the State House and the constituents I represent, I offer my apologies.

Guns.com reached out to Bidondi to get his take on the situation. Bidondi admitted that he was a bit surprised by the language and as for the claim that Miller made about Bidondi antagonizing an elderly veteran, Bidondi said, “If he calls asking the Veteran how gun control takes the guns from the hands of criminals, then I stand guilty.”

Bidondi said he is confident that the 15 or so pro-gun bills currently being debated will fall by the wayside in the weeks to come because “gun owners/supporters far out number gun control supporters” in The Ocean State.