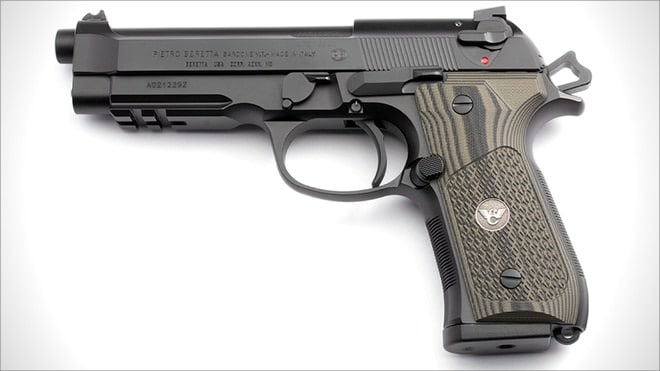 Wilson Combat, a leader in the 1911 and AR industries, is exploring a new avenue of custom work and precision parts for Beretta pistols. Currently they’re focused on the Beretta 92 and 96 series of service pistols although they do offer a few accessories for the newer PX4 Storm series as well.

Bill Wilson, owner of Wilson Combat, has teamed up with Beretta specialist Ernest Langdon for this new project. “I have been shooting the Beretta 92 series pistols for almost 30 years,” explained Langdon. Langdon runs Langdon Tactical Technology, an advanced handgun and rifle training facility. “I can honestly say that I can think of no one better than Wilson Combat to build custom parts and do custom work on your Beretta handguns.”

And while this is the first time Wilson Combat is doing large-scale custom work on Beretta handguns, they are not new to the job.

“The Model 92 is the only service pistol that I shoot as well as a 1911,” said Wilson. “The guys at Wilson Combat have customized several model 92s for me, so it just seemed natural for us to offer these services to our customers. Besides it created an economic reason to do some of the cool stuff I personally wanted.”

Right now, they only have a handful of Beretta products listed but they’re well-suited for competition with a few parts designed to make the full-size pistol easier to carry concealed, including a new series of upgraded combat sights, fiber optic sights, and low-profile safety/decocker levers.

They have developed an in-house short reach trigger and several custom Wilson Combat G10 grips to make these larger handguns easier to handle and manipulate. Other new parts are designed to make the trigger run a little faster, including a custom hammer, custom trigger spring assemblies and reduced-power mainsprings. The parts are all priced competitively with existing high-end aftermarket upgrades for these guns.

And naturally, Wilson Combat has worked out a series of custom work packages for the Model 92 and 96 families of handguns, the Basic Carry Package and the Custom Carry Package.

The Basic Carry Package runs $350 and includes a hand-tuned action, a recontoured magazine well, the installation of a Battlefield rear sight and fluted steel guide rod. After this is complete the frame is re-finished with Wilson Combat’s “Armor-Tuff” treatment.

The Custom Carry Package is offered in two versions, one for pistols that have dovetailed front sights the other for guns with fixed front sights. These packages range from $770 to $795 and include everything in the basic package and add front- and backstrap checkering, installation of an oversized magazine release, a rounded and contoured trigger guard, the installation of a custom safety/decocker or decocker only and the new G10 grips. Like the basic package the higher-end packages also get the Armor Tuff treatment.

Or customers can put together a custom work order that costs less and focuses more on the action without requiring refinishing; Wilson Combat is delivering on the options.

This is a solid line-up of parts and services but it could be expanded some. Wilson Combat is missing a few things like night sights and a wider selection of magazines (they don’t list any Model 96 magazines), but it’s more than enough to get started. And while they offer PX4 accessories, it’s just holsters for now. It would be nice to see a big name like Wilson Combat give the new Beretta service pistol welcome attention.

For a complete list of parts and services for Beretta products head over to the Wilson Combat website.