Inmate pulls gun in courtroom, escapes after being sentenced to 10 years in prison (VIDEO)

A Madison County, Iowa, inmate pulled a gun in a courtroom and escaped after the judge sentenced him to 10 years in prison on a meth charge.

Cory Daugherty, 29, may have been incarcerated, but he still managed to sneak a loaded handgun into the courtroom. When a deputy tried to cuff him and take him back to his cell, Daugherty said no, KSDK reports.

“He actually put a handcuff on one wrist, at which time Mr. Daugherty looked at him and said, ‘No, no, no. I’m armed.’ And as he pulled away from the deputy, he reached into his pocket and pulled out a silver handgun,” said Madison County Sheriff Craig Busch. “Mr. Daugherty turned then and started to run out of the courtroom.” 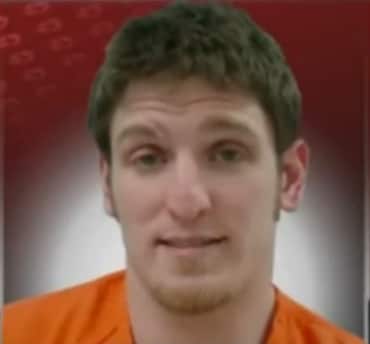 Inmate Cory Daugherty pulled a gun and escaped from the courtroom after being sentenced to 10 years in prison on a meth charge.

Daugherty fled from the courtroom, dashed down a flight of stairs and burst through the front doors. Once outside he cut through an alleyway, and that’s when Busch finally caught up with him.

“I was running through my mind, ‘How can I approach him in my car, stop my car, put the car in park, get out, draw my weapon before he draws his weapon and starts shooting at me.’ Finally, I just thought, ‘Well, whatever’s going to happen is going to happen,” Busch said.

Daugherty gave up without a fight and the silver handgun along with a second firearm he had concealed were retrieved from a nearby trash bin. Both were fully loaded.

The courthouse has minimal security and lacks both a metal detector and a bailiff. Judge Clogg would like “to at least have a deputy” present in the courtroom, but the sheriff says it’s currently not in the budget.