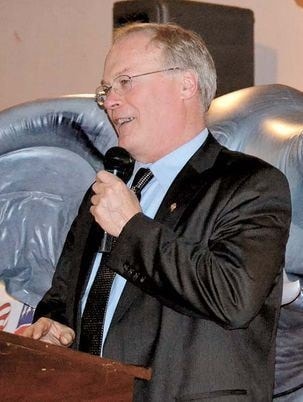 “We are a force to be reckoned with,” says Thomas King, president of the New York State Rifle & Pistol Association on news that his organization doubled to nearly 41,000 members last year. (Photo credit: Leader Herald)

Following a federal judge’s ruling in December that the seven-round magazine limit imposed under the New York SAFE Act was “tenuous, straitened, and unsupported” and therefore unconstitutional, state police have updated their filed guide on the controversial law to urge officers not to enforce the arbitrary magazine limit.

“The New York State Police have followed the same sensible path taken by the New York Sheriffs’ Association and many local law-enforcement agencies in not enforcing a capricious, ill-conceived and unconstitutional portion of the NY SAFE Act,” stated NYSRPA President Thomas King in a press release.

“To date, NYSRPA has spent over $500,000 in litigation and we are prepared to fight the NY SAFE Act all the way to the U.S. Supreme Court where we are confident that many provisions of the law will ultimately be overturned,” he continued.

As noted in previous Guns.com articles, the SAFE Act implemented a number of controversial measures that restrict gun owners; among them, it strengthened the state’s ban on ‘assault weapons’ by broadening the definition (changing the criteria from two cosmetic features, e.g. barrel shroud and a pistol grip, down to just one, e.g. a barrel shroud) and required registration of all the newly defined ‘assault weapons.’

Though, as noted above, a federal judge ruled back in December that seven round limit was unconstitutional. Now New Yorkers can load 10 rounds in their 10 round magazines without fear of getting busted by state police.

Critics of the SAFE Act argue that it was rammed through the legislature by its biggest proponent Gov. Andrew Cuomo, who waved the three-day mandatory legislation-review period.

On this point, King said, “Lawmakers, mental health professionals, and New York’s gun owners were essentially ignored in the rush to enact this law. As a result, careful judicial scrutiny is uncovering some of the law’s flaws and unenforceability.”