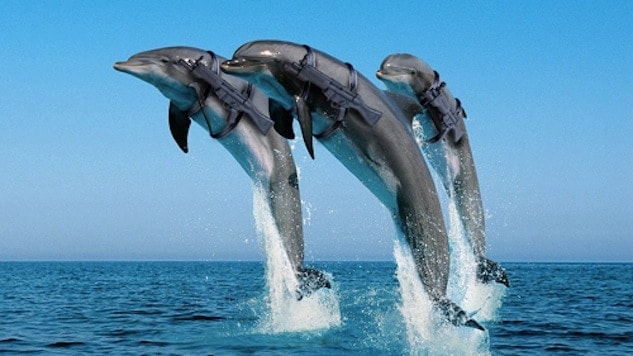 The Ukraine’s combat dolphins will now serve under the Russian regime.

The military combat dolphins that once belonged to Ukraine will now serve under the Russian regime.

As Russia seizes control of Crimea, they have found themselves assimilating more than just land. The combat dolphins were part of a Crimean program that began in the 1960s, and while the Ukrainian Navy had planned to shut it down in April, Russia has decided to keep pressing forward into uncharted waters, Huffington Post reports.

The dolphins have been trained to patrol open water, identify military threats, attack underwater enemy combatants, attach buoys to mines on the sea floor, and according to a Russian news agency, even destroy enemy battleships.

In March of last year, Guns.com reported three of the six-dolphin team were strapped up with guns and ready for combat when they escaped from a Ukrainian Navy staging area in pursuit of a female dolphin.

No comment has been on the first potential mission for Russia’s newly acquired dolphins, but finding their long-lost dolphin brethren wouldn’t be a bad place to start.