Just after the Civil War, the most advanced rifles known to man were lever action carbines with tubular magazines. These ‘cowboy guns’ ruled the West for generations, proving the go to deer gun for 150 years.  And perhaps no other modern lever action rifle has stood the test of time better than the Marlin 336.

Ah, the age of levers

From its inception, the lever-action rifle just made sense. By pulling a cocking handle downward from the trigger guard, this action could both extract a spent shell casing from the breech of the rifle, while at the same time pulling a new round from a tubular magazine under the barrel. Pushing the same handle back up, would eject the spent casing, chamber a new round, and cock the hammer, making the gun ready to fire. One simple motion performing five tasks—that’s still mechanically impressive.

Henry and Winchester hit the market hard with these lever-guns in the 1860s. Then the Marlin Firearms Company of New Haven, Connecticut came on the scene with their Model 1881 a generation later. By the 1900s, Savage had replaced Henry while John Browning’s Winchester Models were every bit as popular as anything Marlin could make. These Browning Winchesters in particular, namely the Model 1886, 1892, 1894, and 1895, were the bee’s knees for nearly a half century. Nevertheless, by the 1930s an inescapable design flaw on all of these guns was coming into sharp focus—they couldn’t take a scope.

And that’s when Marlin took the lead from behind, capitalizing on this hard to anticipate bonus courtesy of a clever new design with some benevolent side effects.

Now stick with us here; this goes back a spell. Way back in 1893 one L.L. Hepburn, a gunsmith at Marlin, was issued patent number 502,489 for a new locking bolt system with a two-piece firing pin and rectangular bolt that could be actuated by an under-rifle lever action. The new “Hepburn action” absolutely forced the head of cartridge against the front of the carrier and into the chamber, while barring the entrance to the magazine, theoretically preventing failure to feeds, or ejects which lever actions were known for. Further, a positive safety button pushed through the action, locking it when activated.

This action, coupled with the single-piece, milled and forged receiver design of the Marlin company’s old Model 1889 rifle (also designed by Hepburn), led to a new gun known as the Marlin Safety Repeating Model 1893. This gun featured a solid frame and a top with something pretty cool—side ejection—which was also something that none of the Browning Winchester’s had. It was cleaner, with less moving parts and therefore less likely to bind up or have debris fall into the action while it was working. The Model 1893 was made in quantity for several years, with production running into the early 1930s. 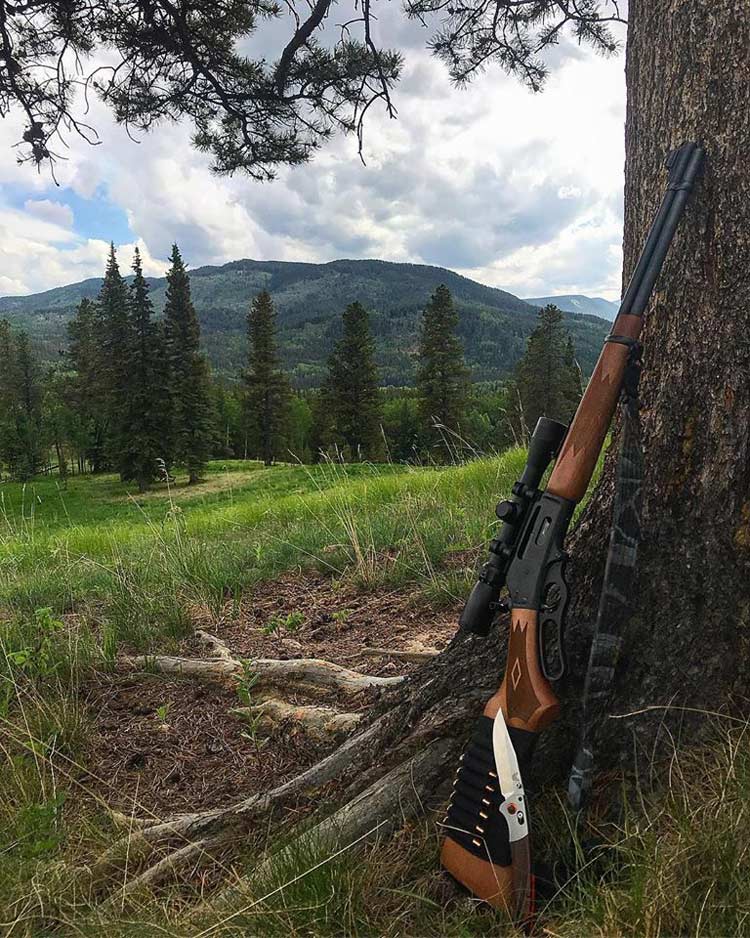 A Marlin 336 lever action rifle leaning against a tree in the great outdoors. (Photo: Marlin/Facebook)

Then in 1936, the old Model ’93 was upgraded with a curved pistol grip stock with a hard rubber butt plate instead of a strait stock with a steel one, improved forearm, and sights. This cosmetically different gun was renamed the “all-new and improved” Model 1936. Over time, this moniker changed to the simpler Model 36, then finally Model 336 in 1948.

The only thing changed in the action of this final incantation was a rounded alloy steel bolt with chrome plating substituted for Hepburn’s original rectangular one. This massive bolt is firmly supported in the receiver and engages in a broad, deep locking surface in the breech bolt, giving it a strong breech.  At the end of the day, one could say the new Marlin lever gun was fresh from the 1890s with only a few tweaks.

The basic model came drilled and tapped for Lyman style receiver sights, could accept an over-receiver scope (more about this later), take 7-rounds of .30-.30 in its tubular magazine (although other calibers were available) and had an overall length of 38-inches. Tipping the scales at 6.5-pounds, it was a very handy and capable brush gun for the introductory price of $61 in 1948.

Minor changes crept into the line over time. Eventually Microgroove rifling in the barrel won out over the legacy Ballard-style left over from Hepburn’s day. The tops of the receivers were sandblasted at the factory after 1960 to reduce glare in the field. Gold triggers came and went then came back again. Sights were continually improved and swapped out.

Speaking of sights, the solid top receiver was ideal for a scope, which after World War 2 became increasingly popular with returning GIs turned deer hunters. Within a generation, the guns were coming pre-drilled and tapped for scope mounts with some models including bases. For decades now the 336 has shipped with offset hammer spurs that can be attached to help shooters cock the hammer under a scope reticle.  Although the basic 336 was designed back in 1893, this solid top feature set it apart from the Winchester 1894’s that were a product of the same era. (But hey, John Browning had no way of knowing you could buy a Weaver scope for $7 in 1948, so let’s cut him some slack.)

The Marlin Model 336 design proved popular with mid to large game hunters across the country and was soon flying off store shelves. The fact that it was sold in a number of special models without all the bells and whistles in select big box stores, at prices less than any bolt-action gun, also helped. For instance, the company marketed the 336 as the “Glenfield Model 30” at stores like Montgomery Ward and Sears, the 30AW by Walmart and the Model 30TK exclusively at Kmart. These no-frills guns came with cut or pressed checkering in birch stocks, basic sights, and a lack of general embellishments. For many, a Model 30/336 was their first ‘real’ rifle.

There were also specialty versions such as the Zane Grey Century Carbine (7800 made) and 1970 Presentation Rifle with its 22-inch octagon barrel (1000 made) and the short-barreled Texan and Marauder carbines.  For the kids there was the Spikehorn with its 16.5-inch barrel, 5-shot mag and 12.5-inch length of pull and the 336Y youth carbine.

Now what you do see Marlin hoarders drool over is the 336’s older brother, the 1893. These vintage (often black-powder only) lever guns can touch the $3-4K mark in certain cases.

The 336 is still in active production by Remington. That is not a misprint, they bought Marlin in 2010, closed their old rival’s landmark New Haven CT factory then reopened shop in more labor-friendly Kentucky. There the gun is still made in no less than five different models to include a carbine, a stainless steel offering, a deluxe model, and a big-loop complete with laminated wooden furniture. Besides .30-.30, more modern 308ME and 338ME Leverevolution chamberings promise good accuracy and take down power out to 400 yards and beyond.

Even with all this though, we’re betting old LL Hepburn would still recognize his handiwork.