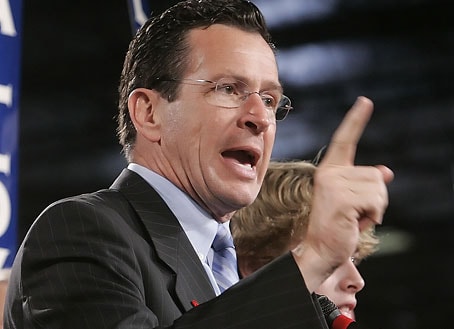 Gov. Dan Malloy of Connecticut has been a dynamic supporter of the harsh gun laws that continue to take effect in that state. (Photo credit: Washington Post)

In the latest round of new Connecticut gun laws to take effect, those wanting to buy a long gun will need the blessing of the state police starting April 1.

As part of the package of harsh laws enacted following the December 2012 Sandy Hook school shooting, the new requirement is only now coming into effect.

Buried inside the massive 140-page bill, it will require those without a concealed carry permit to acquire a “long gun eligibility certificate” from the Department of Emergency Services and Public Protection (Connecticut State Police) before being allowed to purchase a rifle or shotgun in the state.

The newly effective law states that:

-Individuals must apply for a “long gun eligibility certificate” through the Department of Emergency Services and Public Protection (“DESPP”) to purchase any rifle or shotgun. You are exempt from this requirement if you have a Connecticut permit to carry a pistol or revolver; a pistol or revolver retail sales permit; or a pistol or revolver eligibility certificate.
-The fee (tax) for this certificate is $35 and must be renewed every five years.
-You must complete a DESPP-approved firearms training course.
-You must submit fingerprints with your application and a fee of $50 for state fingerprints and $16.50 for federal fingerprints.
-The DESPP commissioner will have 60 days after the receipt of your application to issue the “long gun eligibility certificate,” which can then be presented to a licensed firearms dealer to purchase a long gun.

The Connecticut State Police have come under fire in recent months due to the controversial registration of newly classified “assault weapons” and “large capacity magazines.” These attempts, and suspected large-scale non-compliance from gun owners, have led to pro-gun organizations challenging state lawmakers to either enforce the law or repeal the ban.

“We urge all Connecticut gun owners to comply with this law that infringes upon their Second Amendment rights and will do nothing to help make our communities safer as it is ignored by criminals,” said Larry Keane, National Shooting Sports Foundation senior vice president and general counsel to Guns.com Friday. “But we also urge all the states gun owners to be sure they are registered to vote and that they make their feelings known on Election Day this November.”

That National Rifle Association is pledging its support to help roll Connecticut’s new gun laws back, including backing a lawsuit, Shew v. Malloy, to challenge the constitutionality of several provisions of the law, including its expanded bans on semiautomatic firearms and its restrictions on magazine capacity.

“This is just one bad provision out of many in a terrible law that should never have been imposed on the people of Connecticut,” explained Catherine Mortensen, NRA spokesperson to Guns.com Friday.

“The NRA is doing everything in its power to reverse this dangerous law that has no affect on criminals and only impacts responsible gun owners and sportsmen in Connecticut,” she continued.

For now, potential Connecticut long gun buyers will have a completely new hoop to jump through starting April 1