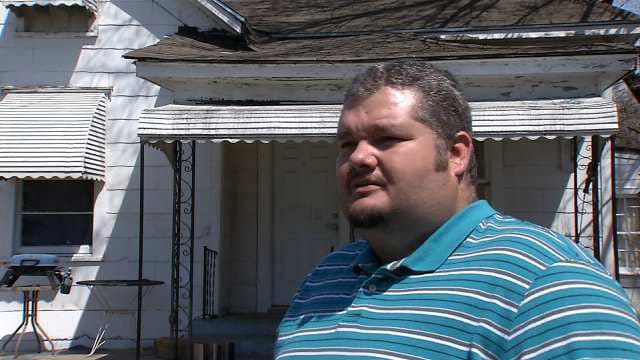 “I’ve asked God to forgive me,” Kyle Ford told reporters. “I feel justified. I don’t feel justified that the man died, but I felt justified in protecting myself and my family.” (Photo credit: Oklahoma’s Own)

An Oklahoma man shot and killed one of three suspected burglars who forced their way into his neighbor’s Muskogee home Saturday night.

Kyle Ford, 30, heard a desperate knock at his door about 9:45 p.m. Local media reported that when he opened the door he found his frightened 46-year-old neighbor, Dana Lewis, asking for his help.

Lewis said that three men approached her outside of her home, forced her inside and demanded valuables. Somehow she was able to run next door to Ford’s home, while the three suspects remained in her own house.

Ford armed himself with a semi-automatic handgun and walked out of his home where he saw the three men standing on Lewis’ porch.

Ford confronted the men and asked them to leave, but they refused. He then cocked his pistol and asked them a second time to leave. At that point, one of the men came toward Ford in a threatening manner while asking, “What are you going to do?”

Ford, fearing for his own safety, then fired a single shot, striking the suspect in the chest from only about a foot away. All three suspects ran away once Ford fired his gun.

When police arrived they found one of the suspects in a nearby alleyway suffering from a gunshot wound. He was transported to a local hospital where he died the following morning just before 5 o’clock. The name of the suspect has not been released, pending notification of his family.

Police were not able to locate the remaining two suspects and unfortunately the home invasion victim was not able to give a very detailed description of her assailants. They are described only as white males wearing dark clothing.

Ford said that the men were acting erratically and, in his opinion, appeared to be on drugs.

The investigation is ongoing but authorities did say that it appears Ford acted in self-defense. Ultimately, the District Attorney will decide if the shooting was justified.

Nonetheless, Ford remains shaken up over the incident and says he never set out to kill anyone.

“It’s not something I ever wanted to have to do,” he said.