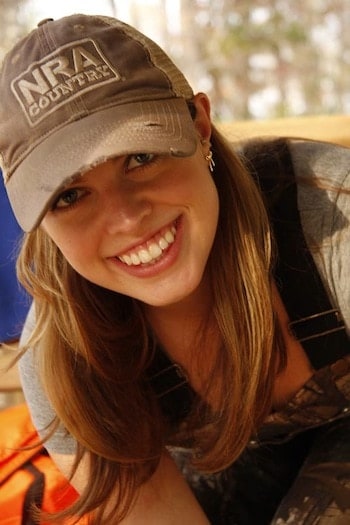 In a move that has the gun community buzzing, the National Rifle Association announced today that Executive Vice President Wayne LaPierre has stepped down as the head of the nation’s gun lobby for undisclosed reasons.

Both LaPierre and Spika declined Guns.com’s request for comment. However, sources close to Spika said that she’s elated by the new opportunity to head up what is arguably the most powerful lobbying group in Washington, D.C.

“With her bright eyes, radiant smile, impossibly strong work ethic and ‘anything’s possible’ mentality, Ms. Spika is the perfect woman for the job,” said an NRA insider to Guns.com.

“She’s so excited to write a new chapter for the NRA, one that continues to emphasize the organization’s longstanding values of gun rights and responsible gun ownership, but one that is also more equipped to confront the challenges of the digital age,” that source continued.

As the social media manager, Spika grew the NRA’s Facebook fan base to well over 3 million members, which is approximately 20 times more than that of the most prominent and active grassroots gun-control organization in the country, Moms Demand Action for Gun Sense in America which has, by comparison, a paltry 152,000 Facebook friends.

Many believe that Spika’s online savviness is just what the organization needs as the war over gun control in this country increasingly becomes waged on a digital battlefield.

“Listen, more people, more gun owners are engaging in social media than ever before,” said another source close with Guns.com. “It makes perfect sense to put someone at the helm who is young, energetic and has a keen understanding of Internet grassroots activism… Brilliant move by the NRA.”

Meanwhile, as for LaPierre, he will continue to serve on the NRA Board of Directors. Sources close to him said he was slightly dismayed by what amounts to a demotion, but that there are no hard feelings and that he thinks Spika will do a fantastic job.

Look for the NRA to openly and officially address the change up at the143rd NRA Annual Meetings and Exhibits at the Indiana Convention Center in downtown Indianapolis, Indiana, April 25-27, 2014.