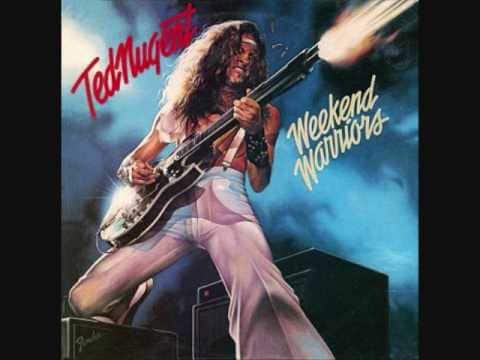 Ted Nugent has been closely associated with guns, gun rights and gun culture for over four decades, as seen on the cover art of his 1978 album, Weekend Warriors.

If all things go as planned, next summer Ted Nugent and company will follow the lead of other notable rock musicians and bring his music and message to Broadway, in a new stage production, thematically centered on gun rights.

“We’ve been workshopping this for months in Michigan.  Ted’s been developing this concept for years. We’re going to protect personal freedom with the only weapon NYC has left — the music,” a representative for Nugent told Guns.com.

Written by Nugent and composer/lyricist/Nugent’s former Damn Yankees bandmate Tommy Shaw and with technical advisement from Stephen Sondheim and James Lapine, Stranglehold: A Musical about Control will examine the motivations, emotions and costs behind freedom hindering legislation through the highly interactive mechanisms of musical theater.  Set in New York in the near future, the “rock musical” tells the story of ‘the Sheeples’ a large American family trying with varying degrees of success to navigate the perils and oppressive forces of modern life.

“It’s a family show but anybody who thinks they know about guns and freedom needs to see this musical because our message is as blunt as an atom bomb: the gun control mindset doesn’t work.  It destroys what we’ve built and clouds the rest”

Open auditions will take place this summer with dates to eventually be announced, though a representative reported that many of the roles have already been cast.

“We’ve kept Stranglehold very quiet but is seems like everybody is trying to get in on this thing, both behind the curtain and in front of it.  Frankie Muniz, James Earl Jones — Schwarzenegger has been calling us. If he has his way, Cameron Macintosh’s fingerprints will be on this project as well.” 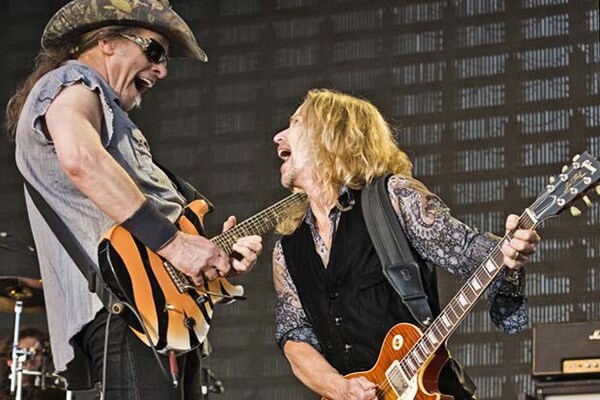 Nugent and Shaw on stage in Bangor, Maine for Damn Yankees reunion.

Major collaborators on this project include award winning stage director George Kaplan and former Styx guitarist and co-writer Tommy Shaw (who will be conducting the orchestra on select dates), both of whom spoke with Guns.com.

“The story is pretty dark, but then again it’s a pretty dark subject.  I mean, this ain’t Kilroy, this is ‘kill joy’,” Shaw mused.  He continued, “But we still want to bring back that late 70s early 80s arena energy so aesthetically, expect classic Nuge—aggressive, loud noises and righteous indignation.  In fact our big issue right now is, how are we going to charge the people standing on the street listening to the show because it’s going to be that loud.”

Like Green Day’s American Idiot, Stranglehold’s song list will feature older music like the eponymous “Stranglehold”, “Kiss My Glock” and “The Great White Buffalo” among others, but also original compositions like “Shoot back” “I left my rights at Tappan Zee (bridge)” and “We, the Sheeple”.  Scores of some of these select original compositions will be made available through Amazon in the coming months.

Though theater locations have not been announced yet, representatives for the production reported that they are in talks with several venues in New York City, most within the Times Square block on Broadway — which led to Guns.com’s most burning question (and probably yours too) about Stranglehold the musical, will we be seeing any guns on stage during the performance? And the answer is, yes.

“In spirit, we’re picking up where Ted’s been going with the flaming arrows, and you’ve got to understand, he’s had almost 30 years to let his imagination fly with these stunts so expect big and in your face” said Shaw. “The man has won and lost more gun collections than Carter has liver pills, so a lot of the steel you see on stage will be from his personal collection.”

When asked if New York City’s draconian gun laws stood in the way of having real firearms in the performance, stage director Kaplan explained further:

“Despite being notoriously bossy about what you can and can’t do, there’s actually a couple of laws in NYC that allow people to pretty much do anything if it is on a stage and you are paying money and taxes to perform on that stage — smoke, have sex, gamble, you name it — because it’s considered art and it would hinder their ability to express themselves or something.  Our lawyers assure us the same allowances that protect the First Amendment rights of performers will apply to the safe, procedurally sound display and discharge of functioning firearms.” 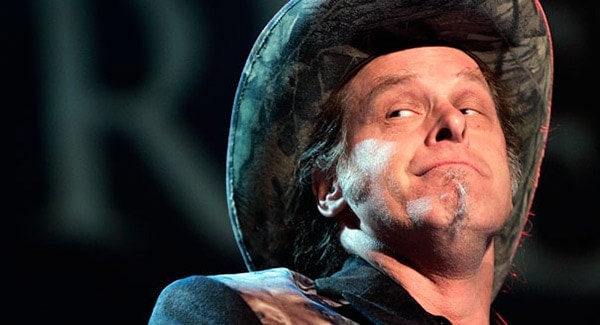 As to whether Uncle Ted will be making an appearance on stage, Nugent responded with this enigmatic statement:

“After I deliver this hot smoking gospel the only appropriate response from the handwringers looking to take our guns will be to be deeply silenced by the truth.”