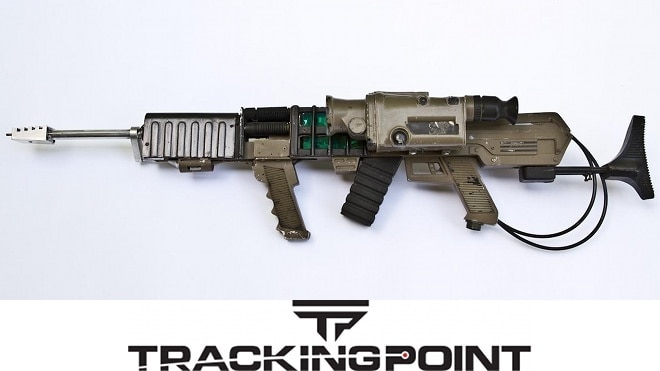 TrackingPoint is getting ready to launch an updated PGR, or Precision Guided Rifle, with a new type of “smart scope” that can track targets even behind walls. TrackingPoint has not set a firm launch date but a late fourth-quarter hard launch is expected.

The next-generation smart scope uses a variety of inputs including high-frequency ultrasonic detector, that in conjunction with laser rangefinder, optical sensors, image prediction software, and directional ultrasonic emitters, can continue to track targets even if they pass behind cover.

“Think of it like sonar on steroids,” said John Lupher, TrackingPoint CEO. “Obviously we can’t go into great detail about how the technology works, but we’ve already proven we can make a PGR that can track targets out beyond 1,000 yards. Now we can do it through walls.”

While the optical tracking system is effective to about 1,200 yards, the ultrasonic sensors have a shorter, 300-yard range, but this is only for the initial release. “We’re working on something that should reach out to about a quarter mile,” explained Lupher. “But that’s not for this year.”

The promising technology has its share of hurdles. Ultrasonic pulses can generate tremendous amounts of heat, leading to skin irritation and other sensations that can alert the target that something is happening. TrackingPoint is confident that their brief pulse emitter is unlikely to go detected.

The tracking system uses optical image recognition to monitor a tagged target. After that target passes behind cover, a computer combines the ultrasonic data with cached optical data to superimpose an image of the target where it is, even if it is visually obstructed.

This information is rendered on a small heads up display inside the optic, which uses an LCD display instead of a traditional eyepiece.

Like most of the other PGRs, the Z-True rifle will be built around a precision bolt-action rifle. Not all the details are available yet but historically TrackingPoint has used Remington 700 rifles for their entry-level PGRs and custom Surgeon rifles for their higher-end offerings.

The prototype model fit with the Z-True scope is a custom one-off, as currently only the optic/ultrasonic scope system is in production. Eventually TrackingPoint will offer these in .300 Winchester Magnum, .338 Lapua Magnum, and .50 BMG.

Like with their other guns, TrackingPoint will be developing specific loads for these rifles, custom ammo to match the specific ballistics programmed into the scope. They will work with off-the-shelf ammo but sacrifice some precision.

“TrackingPoint continues to broaden its line of Smart Rifles with the announcement of the Z-True system,” said Lupher. “The new Z-True scope will appeal to the classic game hunter who is looking for a gun that can continue to track targets behind cover, like trees or abandoned farmhouses. A TrackingPoint hunter can be as good as the greatest marksmen who ever lived.

“We are still pretending these are hunting rifles, right?” asked Lupher.