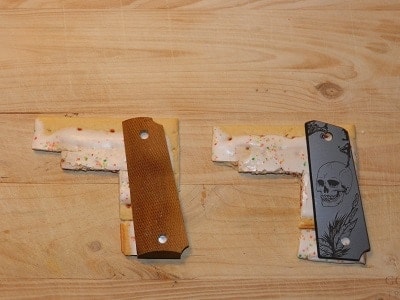 The grips say the manufacturer will help keep positive control of breakfast foods, no matter what their origin, and help foster proper retention of the complex carbohydrate-rich delicacies.

“The time is right, we felt, to move into this new market,” explained Kel Ogg of TAC-TOAST Grips, LLC. “That’s why we took the initiative.”

First identified as a problem when a 7-year-old boy in Baltimore was suspended for chewing an unnamed pastry into the rough shape of a gun, Maryland’s  “Toaster Pastry Gun Freedom Act,” became the first in the country to allow youths to possess weaponized breakfast foods.

This of course led to Florida’s current PCB KTS 14-02 which would allow the “Brandishing of a partially consumed pastry or other food item to simulate a firearm or weapon.”

With this new liberty bestowed on youth, there is now a rush to provide proper grips. Ogg explained to Guns.com that the pastry grips are currently modified pistol grips from all of the major manufacturers except from one Austrian maker who declined to allow their brand to be carried in lunch boxes across the nation– at least for now.

“I can’t tell you which company it is, but it rhymes with Smock,” said Ogg as he showed off other offerings that included the well-known symbols of just about every handgun maker in common usage.

The grips are held in place by food-grade edible fondant pins that can be consumed along with the pastry. The grips are reusable and come with a set of 10 pins, which enables the user to create at least five sets of edible ordnance. This comes all as a part of your complete breakfast.

To be allowed for sale in Ohio, the grips are under review from the Ohio State Police to ensure that they are in fact, a ‘Level-1 lookalike firearm’ and not the dreaded ‘Level-2.‘  Classification as a Level 2 in Ohio would instantly put TAC-TOAST’s accessory on the list of unregistrable pastry items– a defacto ban.

Further, in states such as New York, Ogg is running into issues ensuring that the grips do not count towards the maximum allowable points for weaponized toaster items under the NY SAFE Act. Yes, there is language buried somewhere in that expansive document that covers pastries as well.

In California, the state Attorney General’s office is waiting on a decision from the Supreme Court on Peruta v. San Diego to decide whether possession of a grip-equipped Pop Tart will require ‘good-cause’ before such a pastry could be carried. Also on the agenda are “Tart Free Zones,” in which weaponized toaster products of any kind—including strudels and bagels, are arbitrarily excluded.

To point out the added value of the TAC-TOAST, each grip also includes a business card-sized list of safety rules for the proper handling of breakfast munitions. “Breakfast is the most important meal of the day, and we need to think about safety training as well,” explained Ogg.

“After all, what about the children?”