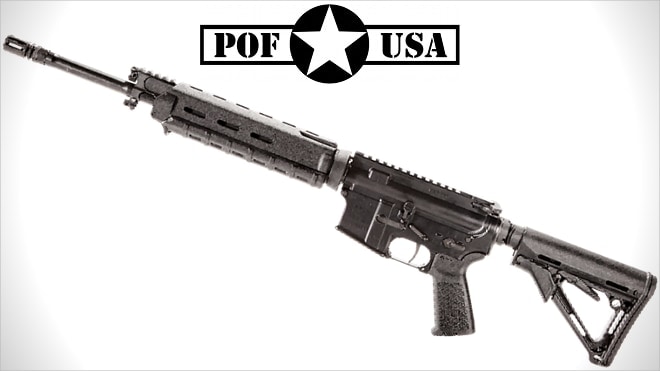 The Patriot Ordnance Factory, or POF, is launching a new entry-level piston-driven AR that’s much more accessible than their popular yet premium rifles. Called the Puritan, this new rifle maintains POF’s proven short-stroke piston system and their “E²” extraction system with a price tag nearly $1,000 less than their current rifles’.

Central to the POF standard is their piston-driven system, which has been tweaked to avoid some of the problems common to early piston systems.

Chambered for 5.56 NATO, the rifle has a 16.5-inch barrel with a one-in-eight twist for use with a wide range of bullet weights.

The core features that separate POF rifles from the AR pack are all included with the Puritan, including the adjustable mid-length gas piston system, the custom E² chamber design, the duty- and competition-ready 4.5-pound single stage trigger with KNS anti-rotation pins, the wheeled cam pin system, the nickel-boron plated bolt and bolt carrier and the anti-tilt buffer tube.

All put together this makes an AR-15 that runs cool, can easily be suppressed, and doesn’t suffer from problems like carrier tilt.

The E² extraction system is a new type of chamber design by POF that adds flutes along the neck of the chamber and leade. These allow a small amount of gas around the neck of the case, which breaks the seal around the front of the case and pushes the case out from the front. This improves the reliability of ejection, reduces wear on the ejector and decreases the chance of a major stoppage in the field.

So the enhanced reliability and clean-running features of high-end POF rifles are all there.

The big difference is the use of standard mil-spec 7075-T6 hard-anodized aluminum upper and lower receivers. The high-end POF rifles are built on custom fully-ambidextrous billet aluminum receivers.

Another thing that makes it less expensive is that the Puritan uses more common accessories. Instead of a Magpul CTR stock it uses a simpler MOE stock and instead of the free-floating Modular Railed Receiver (MRR) handguard assembly it gets a MOE hanguard to match the stock. Not surprisingly it also comes with a MOE pistol grip. Instead of the custom 3-chamber POF brake the Puritan comes with a standard A2 flash hider.

“This rifle has been built and designed on the premise of the company founder, Frank DeSomma, that everybody should be able to own a legendary POF-USA short-stroke piston weapon system,” explained POF in a release.

The Puritan may not be as overbuilt as a P415 or P308 rifle, and it might not have the improved controls or modular, free-floated handguard, but by making these changes, POF can list this rifle at $1499. POF’s flagship 5.56 rifles exceed $2,400 with all the bells and whistles, and their .308 Winchester rifles can top $3,200.

The Puritan is also a full pound lighter at 6.7 pounds without the custom receivers and handguard assembly. All without sacrificing the proven POF enhancements. Like other POF rifles, it is “optics ready,” meaning it doesn’t come with any sights. As these are a matter of personal preference, it’s probably better this way.

For everyone scrimping and saving to get their hands on a POF rifle, this is more than welcome news. For more information about POF and their piston system head over to their website.