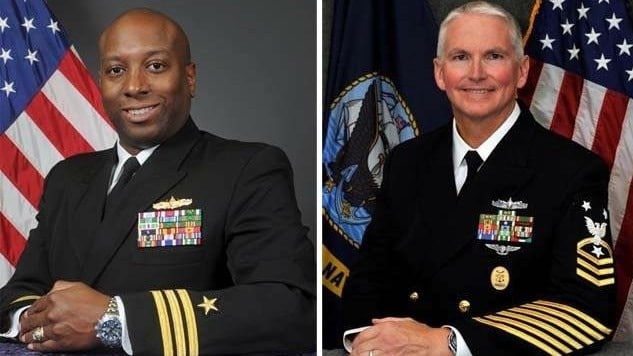 Cmdr. Kenneth Rice, left, and Command Master Chief Stephen Vandergriff of the destroyer Jason Dunham were fired as a result of the “feces march.”

CORRECTION: We originally reported that Command Master Chief Stephen Vandergrifft and Cmdr. Kenneth Rice gave the orders directly. That was incorrect. We apologize for the confusion.

Two naval commanders were fired after leaders under their command forced a female crew to march human feces as a form of punishment.

The Military Times learned from a Freedom of Information Act request about the incident. All the names were redacted except for the two commanders in charge at the time of the incident, Command Master Chief Stephen Vandergrifft and Cmdr. Kenneth Rice.

A chief on the destroyer Jason Dunham ordered 19 women on board to march human feces to portable toilets after they used the ship’s primary toilets, which couldn’t be flushed due to system maintenance, Military Times reports.

The punishment came after several prior incidents of people using inoperable toilets. In each case, damage controlmen and hull technicians were left to clean up the mess. The “feces march” was intended to be a form of punishment, telling the women the march was a way for everyone to see “how nasty you all live.” But the investigation found that the females were not provided with the proper protective gear.

The women cleared the toilets of feces with their hands, which were covered only with the small garbage bags normally meant to dispose of feminine products. According to one witness, the human excrement was liquefied and had the “viscosity of a homemade milkshake.”

While Vandergrifft and Rice were fired from their positions, several other sailors received non-judicial punishment for dereliction of duty.