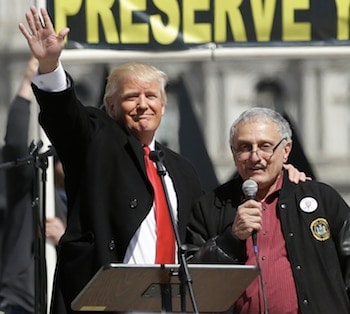 American business magnate and pistol permit holder Donald Trump was among the headliners at a gun-rights rally outside the New York state Capitol building in Albany on Tuesday.

“I’m a big Second Amendment person,” said Trump before a crowd of about 3,500. “I’m a big, strong believer in it … I wanted to be here to support you. I’ll be with you no matter where you are.”

Trump spoke for about six minutes and arrived via his personal helicopter. He was greeted with great fanfare, folks toting signs reading ‘Trump for Governor.’

The event was designed to protest the NY SAFE Act, the sweeping gun control law passed in the wake of the mass shooting at Sandy Hook Elementary School in Newtown, Connecticut, as well as the man behind the law, Gov. Andrew Cuomo.

Republican gubernatorial candidate Rob Astorino also attended the rally. He urged attendees to get back at Cuomo by supporting his bid for governor

“He took away your rights, you take away his job,” Astorino said.

Tom King, the President of the New York Rifle and Pistol Association, attended the event as well, but he did not address the crowd. Earlier reports suggested that King wasn’t going to attend the event because he was worried that the rhetoric would be too contentious and threatening.

However, King told News Channel 13 that due to the organization’s lawsuit against the SAFE Act, it would be best if he didn’t participate as a speaker.

“Our lawyers have advised us not to (participate in the rally),” he said. “Last February, things that I said at the rally … were used in Amicus briefs trying to disqualify us from the lawsuit.”

With respect to the idea that the rhetoric could get out of hand, King said that “Gun owners are good people, and we don’t need a few who are over-exuberant to ruin it for the rest of us.”

In response to his critics at the rally, Cuomo obliquely acknowledged their sentiment, largely chalking it up to the fact that gun-rights is a polarizing issue.

“It’s a topic that drives strong emotions, like many topics — a woman’s right to choose, strong emotions — so I understand it,” Cuomo said. “But it’s the nature of the discussion.”

As noted in previous Guns.com articles, the SAFE Act implemented a number of controversial measures that restrict the rights of law-abiding gun owners; among them, it strengthened the state’s ban on ‘assault weapons’ by broadening the definition (changing the criteria from two cosmetic features, e.g. barrel shroud and a pistol grip, down to just one, e.g. a barrel shroud) and required registration of all the newly defined ‘assault weapons.’

However, with respect to the seven-round limit, a federal judge ruled back in January that that aspect of the SAFE Act was “‘tenuous, strained and unsupported,” and thus struck down that provision. Now New Yorkers can load 10 rounds in their 10 round magazines.

The U.S. Second Circuit Court of Appeals is currently reviewing the case against the SAFE Act. In the coming months it’s expected to render a decision on the constitutionality of the law.