Gun industry has nearly doubled in economic activity since 2008; Breakdown by state 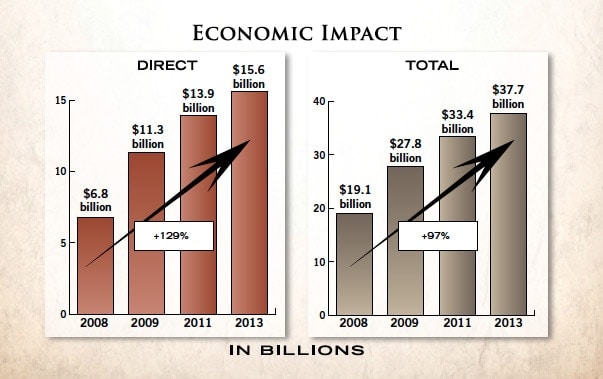 The gun industry’s overall economic impact on the U.S. economy during the past 5 years. (Graph: NSSF)

The National Shooting Sports Foundation released a report on April 2 detailing the 2013 economic impact of the firearms and ammunition industry on the nation, each state and the District of Columbia.

“We have seen dramatic, unprecedented during peacetime growth in the firearms and ammunition industry that is the direct result of consumer demand for our products in the last five years,” said Stephen L. Sanetti, NSSF president and chief executive officer.

“While our nation’s overall economic recovery has been slow since 2008, our industry has been a true bright spot,” Sanetti added.

In 2013, the industry was responsible for $37.7 billion in economic activity, provided 245,745 jobs and paid $11.7 billion in wages, according to the report. Those figures have increased significantly since 2008. The industry saw the overall impact increase by 97 percent and added 48 percent more jobs.

About $4.5 billion in wages were paid to the employees directly involved in the gun industry, with an average annual salary of $47,709 (about $3,459 less than the national average for other manufacturing jobs).

The gun industry had a  $15.6 billion direct economic impact on the U.S. economy, but also spurred $22.1 billion in indirect activity.

And for Uncle Sam, the gun industry provided about $644 million in taxes.

According to the report, California had the most gun industry related jobs with 22,975 and of those, 9,478 were directly involved.

On the flip side, the District of Columbia had the fewest gun related jobs with 226 and of those, 55 were directly related.