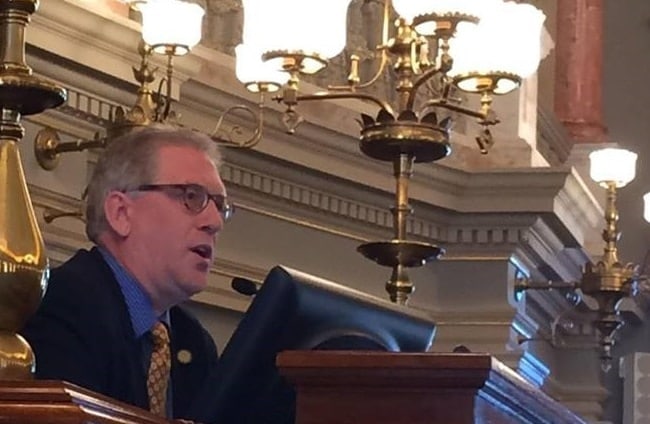 A bill that would overturn city and county gun laws, expand open carry, and speed up NFA transfers passed the Kansas Senate Wednesday by a 34-2 vote.

The legislation would end the patchwork series of gun and knife laws in the Sunflower State that have been established by local governments and replace them with only the state’s statutes. Furthermore, it would expand open carry provisions and prohibit municipalities from implementing local ordinances relating to the transportation of firearms.

“Local control in many instances is best,” said Sen. Clark Shultz, (R-McPherson), who carried the bill during Senate floor debate. “In this case, we’re talking about a fundamental right to bear arms.”

The legislation, SB 447, takes aim at a number of issues in its expansive text. Besides allowing increased open carry opportunities in the state, it also would prevent cities and counties from regulating firearms sales or how guns are stored or transported. While local governments could still prohibit open carry in public buildings of they wish, they would be limited in their powers outside of that scope.

In an effort to help remove roadblocks to those wanting NFA-regulated items like suppressors and short-barreled rifles, the bill includes a “shall certify” requirement that a chief law enforcement officer (CLEO) must sign off on an application to transfer such an item within fifteen days, as long as the applicant is not prohibited from possessing it.

Finally, the bill would ban public funds from gun buybacks and order that guns seized by law enforcement either be sold to a licensed gun dealer (FFL) or donated to hunter education programs.

The bill has wide support from the National Rifle Association as well as state legislators, which has those who oppose it resigned to its passage.

“This body is determined to pass a gun bill that takes away local control and mandates their wishes onto cities and counties, and I think they’re going to find any way that they can to make that happen,” said Mike Taylor, a lobbyist for the Unified Government of Wyandotte County and Kansas City, Kansas, which bans the open carrying of firearms. If SB 447 becomes law, that local prohibition would be overturned.

This Kansas legislation continues the growing trend nationwide in States moving to limit local gun laws. These so-called preemption laws have long been standard in Florida, while the Governors of Mississippi and West Virginia recently signed similar versions in their respective state over the howls of local mayors.

Senate Bill 447 has now been sent to the Kansas House and referred to the Committee on Federal and State Affairs  for review. A vote is expected on it in coming days.