A woman was arrested Tuesday after her prank “school shooter” text to her daughter sparked a full-scale police response to Virginia College in Spartanburg, South Carolina.

Angela Timmons, who works in the financial aid department, texted her daughter she heard shots fired in the school. The concerned daughter quickly texted Timmons back, but when some time passed and there was still no response, she reported called 911, WYFF4 reports.

Dozens of Spartanburg County Sheriff’s deputies rushed to the scene, only to find the entire ordeal was hoax. 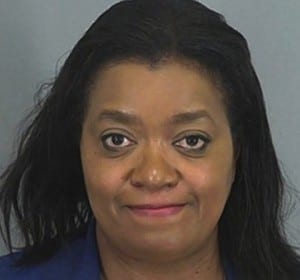 Angela Timmons was arrested after her daughter called in a school shooter in an April Fool’s prank gone wrong.

“I’m not very happy about this; I don’t mind letting you know about it,” said Spartanburg County Sheriff Chuck Wright. “We got deputies that drove very quickly to get over here, without regards for their own life. They go into that school expecting the worst. It just wasn’t funny.”

Timmons was arrested and charged with disturbing school, aggravated breach of peace, and two counts of unlawful use of a telephone. She was released later Tuesday night after posting bail.

“It was just a simple joke between my daughters and I, something we do every April Fool’s Day,” Timmons said Wednesday. “Obviously, if I thought anybody, any harm would come to anyone, or anything would happen where my place of work would be involved I wouldn’t have done it.”

“I take full responsibility, let me say that. What happened, it was a simple, if you can imagine, a simple prank. I chose in bad judgment, not thinking, I chose the wrong prank given today’s times,” Timmons said. “I am so apologetic and sorry to my coworkers at Virginia College who were impacted by that pressure or that stress of the moment, but I had no intentions of doing that.”

While Timmons expressed her remorse for her “bad judgment,” she also said she felt like she was treated like an “intense character,” and feels “that I could’ve been treated differently.”

Virginia College would not comment on whether or not Timmon’s would lose her job over the matter.