Ever increasing numbers of Hawaiians are buying guns even with the state’s draconian registration laws. (Photo credit: Hawaii Defense Foundation)

The Hawaii Attorney General’s office announced that firearms permits in the state were at record levels in 2013 with more than 60,000 guns registered.

This information comes from a 13-page report compiled by Paul Perrone, the state Chief of Research and Statistics who released the report on Thursday.

The study, comparing firearms registration figures over the past twenty years, showed that the number of permits processed annually across the state has skyrocketed in the past decade. In fact, the number of firearms registered soared an amazing 530 percent since 2000, climbing from just 13,617 to no less than 60,757 by 2013.

“It’s simply a fact that anti-gun politicians, supported by anti-gun media, are our best gun sales persons,” said Dr. Max Cooper, President of the Hawaii Rifle Association, to Guns.com Friday when asked about possible reasons for the dramatic increase.

In 2013 alone, approximately 22,765 personal firearm permit applications were processed statewide, and increase by nearly 5 percent from 2012, the next highest year. 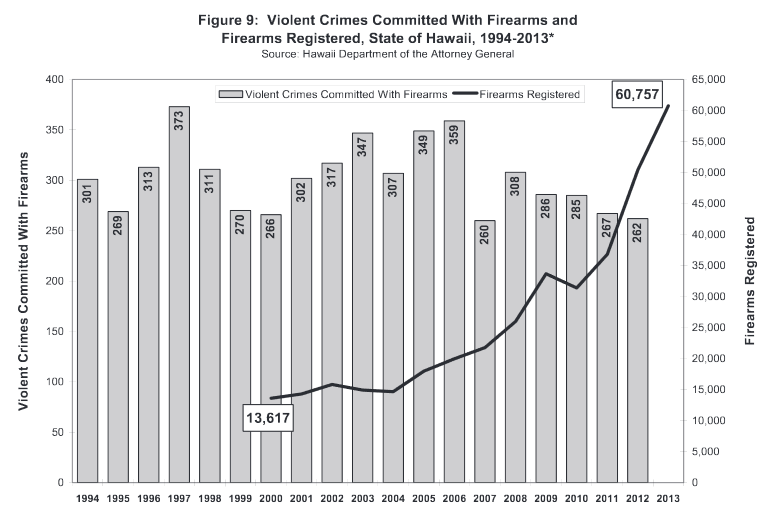 Gun numbers have risen steeply in the Aloha state over the past twenty years, while violent gun crime has remained static or declined. (Photo credit: Hawaii Attorney General)

In looking at the data, it would seem that the biggest jump in firearms imported, sold and transferred in the state came after 2008, with the number of registrations nearly doubling in the past five years, all the while the number of violent crimes committed with firearms actually saw a steady decline.

These eye-popping numbers, however, precipitated comment from pro-gun control groups, who cited Hawaii’s strict gun laws, which include near-universal gun registration, as a success.

“Hawaii is a great example of how strong, common-sense gun laws can work to make people safer,” said Jonathan Lowy, director of the legal action project of the D.C.-based Brady Center to Prevent Gun Violence.

“Hawaii is sort of a good test case that shows if the United States had strong federal gun laws, and you couldn’t circumvent them by going to weak gun-law states, you’d have a lot less gun violence,” he added.

“There is absolutely no evidence Hawaii’s draconian gun control schemes and have reduced crime rates in the state,” said Catherine Mortensen, Spokesperson for the National Rifle Association to Guns.com Friday.

“What is clear is that an overwhelming majority of the states have rejected Hawaiian-style gun control and passed strong self-defense laws.  Gun control is a abject failure because the laws only affect the law-abiding while criminals ignore them,” stated Mortensen.

The number of concealed carry permits in Hawaii remained shockingly low when compared to the rest of the country, as referenced in the report.

In all, just eight permits were requested by private citizens from the state’s county police departments, who ‘may issue’ these only at their discretion after being shown extreme cause. Of those eight, all seven submitted to the Honolulu Police were declined while Kauai County PD issued one to its only applicant.

“Since 2000, a statewide total of 63 applications for concealed carry licenses were submitted to Hawaii’s four county police departments.  A total of four applications were approved,” explained Paul Perrone, author of the Attorney General’s report to Guns.com in an email Friday.

None of these were from the Honolulu PD.

Perrone pointed out the peculiarity of that trend, saying, “It’s interesting that our two smallest counties population-wise (especially comparatively tiny Kauai) were the only to issue carry permits.  The vast majority of applications were made to the Honolulu PD, who cover the island of Oahu and serve approximately 77% of the state’s population.  (Kauai serves approx 5%.) ”

In a possible explanation for the low numbers Perrone offered that, “The applications are routinely denied with the explanation that ‘did not meet the chief’s criteria,’ though I don’t know what these criteria may be.  If criteria do exist, I don’t believe they are shared with the applicants,”he said.

When compared to figures in other states of the same size, Hawaii’s concealed carry population seems incredibly small. For instance Maine, with roughly the identical population as the Aloha State, issued more than 11,000 permits in 2013.

With the recent non-binding decision from the U.S. 9th Circuit Court of Appeals in the case of Baker v. Kealoha, in which a three-judge panel declared the Honolulu Police Chief’s standard of ‘may-issue’ to be invalid, these numbers could soon see a huge reversal.

“Baker will take a while to have an impact in Hawaii,” explained Dr. Cooper to Guns.com. “Law enforcement will emplace stumbling blocks.”

It is expected that the Honolulu Police Chief will appeal Baker.

Until then, the number of firearm registrations seem like they will keep climbing.