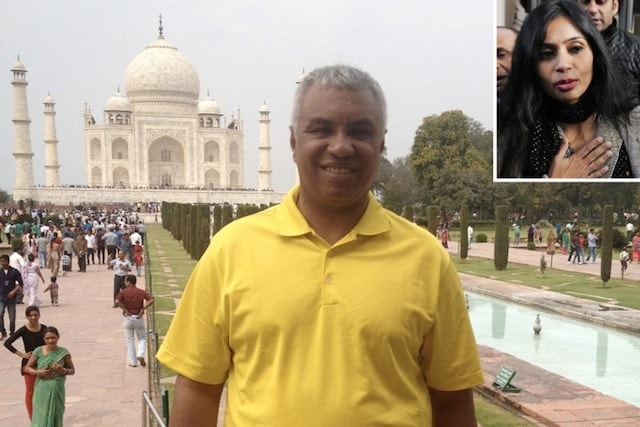 New York Police Officer and former Marine Manny Encarnacion was arrested in India after local police discovered three rounds of ammunition in his checked luggage. He and his wife, Vida, (top right) were at a NYPD firing range two days earlier for a department required certification.

A New York police officer has been arrested in India after local authorities discovered he had three rounds of ammunition in his luggage, officials said Friday.

New York Police Officer and former Marine Manny Encarnacion was arrested March 10 at New Delhi’s Indira Gandhi International Airport after a local police officer found three rounds of ammunition packed in his checked luggage. Encarnacion has been barred from the leaving the country, and NYPD Deputy Chief Kim Royster said his agency is working to get their officer back to the U.S., but they fear this case may be retribution for the arrest and strip-search of an Indian consular last year in New York, the Associated Press reports.

According to New York Post, Encarnacion was at a NYPD firing range with his wife, Vida, qualifying for a department-required certification. During that time, he tucked three spare rounds into his jacket pocket and forgot about them.

It’s possible the snafu is in connection to December’s strip search of New Delhi’s then-deputy consul-general Devyani Khobragade, who was denied diplomatic immunity and allegedly mistreated.

One of the local authorities at the New Delhi airport allegedly told Encarnacion that “you guys like to strip-search our diplomats” before he was arrested and charged with violating the country’s Arms Act of 1959.

The NYPD is working to have Encarnacion’s charges dropped and returned to America. As it stands, he faces up to 7 years in an Indian prison and if convicted he will lose his job with NYPD.