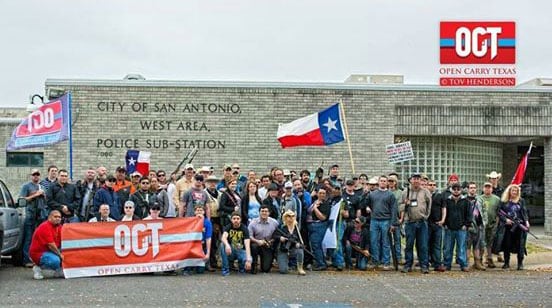 Even with almost 100 armed protesters gathered together, no shots were fired and no injuries were reported during the demonstration. (Photo credit: Facebook)

A group of gun-rights advocates rallied in front of a San Antonio police substation Sunday to protest a city ordinance and the treatment a young man received last month from police officers while he was open carrying a rifle across his back, a local Fox affiliate reported.

Nineteen-year-old Henry Vichique was walking home about 8:00 p.m. on March 31 when he was approached by police officers after they received a 911 call from someone claiming that Vichique was aiming the firearm at others.

However, Vichique says he did nothing wrong, that he was simply carrying the rifle for protection, like he often does, and that his rights were violated.

When officers arrived they demanded Vichique drop his weapon, which was strapped to his back by a sling, and when he did not immediately comply, they tased him without warning.

“I kept (the rifle) on me. I did not want to make any attempt to look like I may be aggressive because they could have shot me on site,” Vichique said. “I just told them I was within my rights. I didn’t argue with them.”

Vichique claims he didn’t argue with the officers, he wasn’t combative and remained respectful. Regardless, Vichique was tased, disarmed, handcuffed and arrested. All of which the gun-rights group Open Carry Texas claims was illegal.

But part of the problem stems from the fact that a city ordinance, which prohibits the carrying of a loaded rifle or shotgun on a public street, directly conflicts with state laws which make it legal to open carry a loaded long arm in the state of Texas.

In addition, “State law says no municipality may pass a law that regulates the keeping, transportation, or ownership of firearms. That’s exactly what San Antonio has done,” Open Carry Texas President CJ Grisham explained, adding, “If they’re law enforcement, they need to enforce all the law. They enforce state laws just like they enforce city ordinances and the state law says the city ordinance is unlawful, so I would prefer they enforce the state law and not an unlawful city law.”

And Grisham, who is a decorated military veteran, is no stranger to having his rights violated either. In fact, he was arrested last March for “rudely displaying” a rifle while on a 10-mile Boy Scout hike in the rural area of Temple with his 15-year-old son, who was attempting to earn a merit badge.

Grisham is hoping that Vichique’s incident with the police will garner attention from the Texas attorney general. In addition, Vichique has requested a thorough investigation into his encounter with the police, whom he thinks just aren’t properly trained.

“I guess they weren’t trained properly. I think it goes way more internally, how they’re trained. An audit needs to be issued to make sure they’re up to par [on state laws],” Vichique said at the weekend rally.

Nonetheless, San Antonio Police Chief William McManus backs the actions of his officers and says that, lawful or not, their commands should be obeyed.

“In today’s world, given all the active shooter situations we’ve had across the county, people become afraid when they see a person carrying a weapon down the street, especially at night. You know, they don’t know what the intention of that person is,” McManus added in support of the city’s ordinance, which some of protesters openly and admittedly violated Sunday.