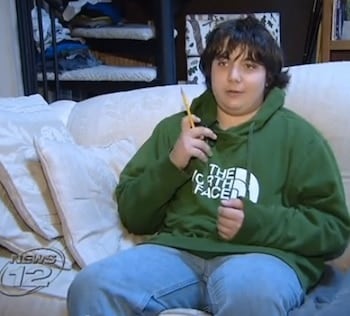 A 13-year-old student from Vernon, New Jersey, was suspended from school last week and given a psychological evaluation after a classmate witnessed the student twirling a pencil in a manner that resembled “gun motions,” local affiliate News 12 reported.

Ethan Chaplin, a seventh grader at Glen Meadow Middle School, was sent home from math class after a peer saw the teen twist a pencil around that had a bent pen cap attached to it, which allegedly resembled the movement of a firearm.

“He’s making gun motions, send him to juvie,” observed Chaplin’s classmate, who according to Chaplin, was bullying Chaplin the day before he made the accusation.

Following the claim by the classmate, Chaplin was forced to undergo extensive psychological and physical exams.

“The child was stripped, had to give blood samples (which caused him to pass out) and urine samples for of all things drug testing,” Michael Chaplin, the boy’s farther, told infowars.com about the testing.

“Then four hours later a social worker spoke to him for five minutes and cleared him,” he continued. “Then an actual doctor came in and said the state was 100 percent incorrect in their procedure and this would not get him back in school.”

In discussing the situation, Chaplin’s father was irate at the way in which school officials handled the situation.

“I’m absolutely livid,” he told News 12. “I think it’s gross misconduct at its finest. They took something so minimal and took it so far over the edge.”

Yet, school officials said that they were simply following protocol, intimating that it is better to be safe than sorry in situations where a student may be a threat to himself and/or others.

“We never know what’s percolating in the minds of children,” said Vernon Schools Superintendent Charles Maranzano. “And when they demonstrate behaviors that raise red flags, we must do our duty.”

Chaplin’s father is scheduled to meet with administrators on Monday to determine when the teen can return to class.