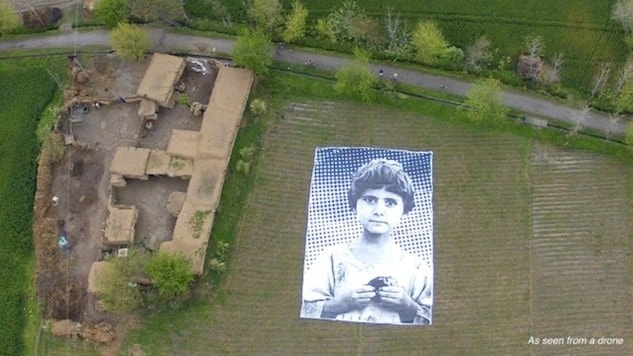 Artists installed this giant poster in a village near the border of Afghanistan to remind drone operators their targets are people, not “bug splats.”

Artists installed a giant poster of a young Pakistani girl in a village near the border of Afghanistan to deter drone pilots from striking.

The title of the image is called “not a bug splat,” and refers to “bug splat,” a term used by Predator drone operators when referring to the people that were killed as a result of their operation. The photo itself is of a Pakistani girl whose parents and two siblings were killed in a drone strike, Daily Mail reports.

The project was backed by Amnesty International, who claims that since 2004, drone strikes have claimed nearly 900 Pakistani lives. Those who live in the Khyber Pakhtunkhwa region, where the poster was placed, say drone attacks happen nearly every day. And according one of the group’s representatives, drone pilots have dehumanized their targets. Amnesty International says that since 2004, nearly 900 Pakistani lives have been lost to drone attacks.

“To challenge this insensitivity, as well as raise awareness of civilian causalities, an artist collective installed a massive portrait facing up in the heavily bombed Khyber Pukhtoonkhwa region of Pakistan where drone attacks regularly occur,” Amnesty International posted to their website.

The group hopes the image will remind drone operators that their targets are living people, not “bug splats.”

“Now, when viewed by a drone camera, what an operator sees on his screen is not an anonymous dot on the landscape, but an innocent child victim’s face.”