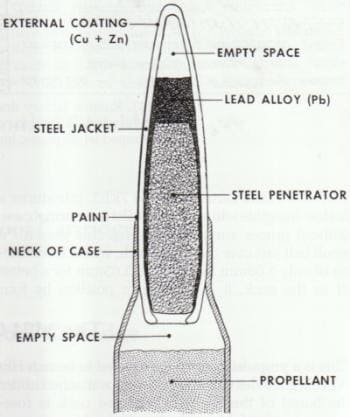 The Bureau of Alcohol, Tobacco, Firearms and Explosives announced Monday that it has deemed Russian surplus 7N6 5.45×39 type ammo “armor piercing,” so it cannot be imported into the United States.

“When ATF tested the 7N6 samples provided by (the U.S. Customs and Border Protection agency), they were found to contain a steel core,” the federal agency said in a news release, adding, “Accordingly, the ammunition is “armor piercing” under the section 921(a)(17)(B)(i) and is therefore not importable.”

Up until now, hobbyists commonly shot 7N6 rounds from rifles like the AK-74, but CBP wanted to know if there was a handgun chambered in that caliber as well, which would possibly redefine the cartridge as “armor piercing”.

For the ruling, the ATF cites the amendment in the Gun Control Act of 1988 that defines armor piercing ammo as:

(i)      a projectile or projectile core which may be used in a handgun and which is constructed entirely (excluding the presence of traces of other substances) from one or a combination of tungsten alloys, steel, iron, brass, bronze, beryllium copper, or depleted uranium; or

(ii)        a  full jacketed projectile larger than .22 caliber designed and intended for use in a handgun and whose jacket has a weight of more than 25 percent of the total weight of the projectile.

Since the ATF only tested 7N6, its determination only applies to that specific ammo. Other 5.45×39 cartridges — without a steel core — would have to be independently examined to determine their importability, according to the statement.

The response comes a week after a U.S. congressman made an official inquiry to the ATF about a possible ban on 7N6. Arizona Rep. Matt Salmon asked for confirmation that the ATF is examining 7N6, why and under what authority.

Salmon argued that banning 7N6, an inexpensive variant of 5.45×39, would place an unnecessary burden on law abiding citizens wanting to exercise their Second Amendment rights.

“I am troubled that such a reliable, cost-effective, and popular choice, such as the “7N6 offering of the 5.45×39 cartridge would be banned for import by the BATFE after years of trouble-free import and use,” Salmon wrote in his letter. “Furthermore, I am concerned that decisions such as these pertaining to a popular choice of ammunition that Americans have chosen to purchase and use are being made as a matter of bureaucratic policy.”

Before the ATF confirmed the examination, the National Rifle Association and other gun advocates were already rallying support to fight the ban on 7N6.