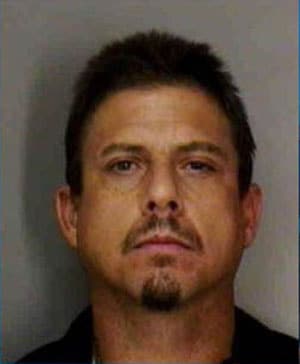 According to police, Mitchell Large had a prior criminal history which included assault and domestic violence. (Photo credit: WFLA)

An intruder was fatally shot when he broke into a family of four’s Winter Haven, Florida, home early Monday morning, not knowing that three of the four were armed.

Local media reported that it was just before 7:00 a.m. when the family heard a noise at the back door. The homeowner’s adult son, Luis A. Pena armed himself, went to see what the commotion was about, and discovered a man trying to get into the house through a set of French doors.

Pena fired a warning shot, but the suspect, later identified as 40-year-old Mitchell Large, did not heed the warning and continued to enter the residence anyway. Once inside, Large made his way to the kitchen where he was greeted by the father (Luis F. Pena), the mother (Bacenbina) and the son, all of whom were armed. An adult daughter was also in the house at the time, but did not witness the incident.

At least two of the family members opened fire on the intruder, striking him at least once. When police arrived minutes later, they discovered Large lying on the kitchen floor. He was pronounced dead at the scene.

Authorities were immediately unsure exactly how many shots were fired inside the home, but did confirm that Large had been struck at least once in the torso. An autopsy is also scheduled to be performed on Large.

Police stated that there was no known connection between the Pena family and Large.

It is unknown if Large was armed, but nonetheless no charges are expected to be filed against any member of the Pena family.

“Whether he was armed or not armed,” Winter Haven police Chief Chief Hester explained, “When he failed to retreat they certainly had a right, if it turns out to be this way, would have a right – to defend themselves.”

And although neighbors were surprised to hear of such an incident in the neighborhood which is normally described as “peaceful” and “quiet,” they still support the actions of the Pena family, who have lived in the house since 2006.

“They let him know, ‘Hey this is a warning; we’re in here. Don’t come in here,’ and then he basically got what he deserved. I mean you can’t just walk into people’s homes,” said neighbor Breaunna Smith who lives in the area with her fiancé Almonte Ford.

“You know, I hate that a man was shot, and I hate that he died,” added another neighbor Denver Kemp, “But you know you’ve got to take a stand against people that are doing this stuff.”