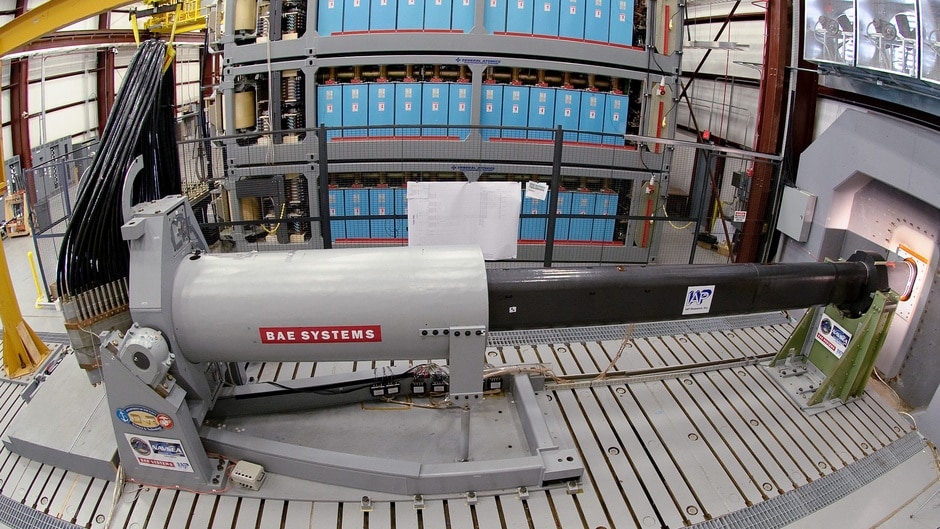 Twenty-three million, six hundred thousand foot-pounds of force, or 32 megajoules. That is how much a 23-pound projectile traveling a mach 7 generates. That is what the U.S. Navy’s new rail gun is capable of.

Sea trials of the new rail gun will begin in 2016 if all goes according to plan, with the possibility of rail guns entering service as soon as 2018.

The Navy has been developing rail gun technology off and on since its first tests in 2006, and this rail gun stems from a project dating back to 2010. The Office of Naval Research, with help from BAE Systems, developed a proof-of-concept that operated at about 33 megajoules.

Rail guns use powerful electromagnets and Lorentz forces to accelerate projectiles instead of traditional explosives and propellants. This not only accelerates the projectiles to higher speeds, it gives them a much longer range compared to conventional naval guns.

While the biggest chemically-powered guns have an effective range out to about 50 miles, rail guns are projected to reach out to targets well past 100 miles away — well into missile territory. Future rail guns may have ranges out to 200 miles or more.

Not only are the guns pretty amazing — or terrifying, depending on which side of the muzzle you happen to be on — they’re also cost-efficient.

A single missile costs about $1 million dollars, give or take half a $500,000, where a single rail gun projectile can be manufactured for about $25,000.

Combined with modern targeting systems, they can be used as anti-missile systems as well. Current rail gun systems are command-guided but future projectiles may be self-guided, once the Navy develops an electronics package that can withstand being accelerated to mach 7 in a fraction of a second.

“That … will give our adversaries a huge moment of pause to go: ‘Do I even want to go engage a naval ship?'” Klunder told reporters. “You could throw anything at us, frankly, and the fact that we now can shoot a number of these rounds at a very affordable cost, it’s my opinion that they don’t win.”

Testing will begin with the USNS Millinocket, a high-speed cargo ship. The Navy selected this vessel because of its large deck and cargo bay.

The Navy has not determined what combat vessels will be fitted with rail guns as of yet. While it’s likely that they will lose some conventional ordnance capacity, rail gun projectiles take up far less space than missiles, with Klunder saying if a ship can carry dozens of missiles, it can carry hundreds of projectiles.

This allows rail gun-equipped ships to simply outgun traditional naval vessels. The Pentagon is keen on keeping a technological advantage over foreign navies.

Rail guns do require large amounts of electricity to run. This rules out smaller ships but larger nuclear vessels will have no problems powering these long-range guns. Still, the Navy is looking to develop battery systems to allow smaller warships to use rail guns as well.

It’s clear that the Navy is eager to make rail guns a reality. This is a far cry from a few years ago, when government cutbacks nearly cancelled the program in 2011. In the end, that was a minor setback for rail gun tech, as the rail gun project was put back into place at an accelerated schedule in early 2012.

The fire seen is not caused by burning propellant. It is the atmosphere combusting under friction generated by the projectile.