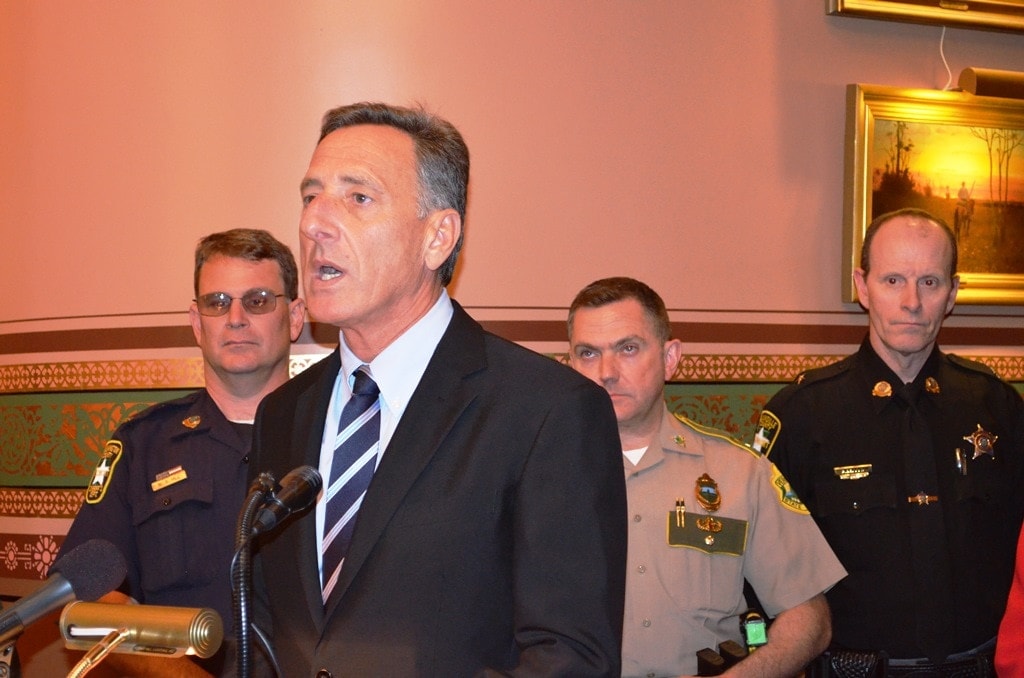 Vermont Gov. Peter Shumlin could soon sign a bill that would establish a framework for law enforcement to seize and store guns from those who are the subject of a restraining order in that state. (Photo credit: Alicia Freese/VT Digger)

Buried inside a bill that would adjust fees for lottery ticket sales, returned checks and the use of the “Market Vermont” logo, is a budding requirement for police to confiscate, store for a fee and sell privately owned guns.

The legislation, among its many regulatory tenets, would establish a framework for law enforcement to seize and store guns from those who are the subject of a restraining order.

“We’re talking about folks who have been abusive to their partner or spouse, usually wife,” Gov. Peter Shumlin said at a news conference in Barre last week.

Ostensibly designed to adjust certain judicial and executive fees inside the Vermont government, just six pages of the 31-page bill, H.735, deal with firearms. It is this section, however, that is drawing the most attention.

In its body, the bill would authorize law enforcement agencies in the state, and FFL holders working with them, to charge storage fees for firearms surrendered to the police under a restraining order. This fee would amount to $4 per week as well as a $25 retrieval fee if the gun were allowed to be picked back up. Guns not recovered would be sold at auction, with the proceeds, minus storage fees, going to the former owner.

Shumlin in 2013 proposed a plan to appropriate $75,000 for a fund to provide loans to Vermont law enforcement to pay FFL’s to store guns seized. “There’s literally no place to put them,” he said at the time. “It’s not just a matter of throwing these things in the basement of a sheriff’s office.”

Gun rights groups in the Green Mountain State, including the Vermont Federation of Sportsmen’s Clubs and the Gun Owners of Vermont, oppose the measure.

“H.735 is a forfeiture bill that tells police if a person gets a temporary restraining order, they have to come into the house and take all weapons — not just firearms, but all weapons,” Ed Cutler, president of Gun Owners of Vermont, said.

Legislation that goes after the guns of those who are the subject of restraining orders are growing in popularity. In 2013, California Gov. Jerry Brown signed SB 140 into law, a bill that funds a program that allows the state government to send out special agents to confiscate firearms from individuals who are prohibited from owning them.

Meanwhile, a similar bill in Maryland was introduced last month that could ultimately wind up confiscating guns from as many as 110,000 in that state’s database, including those with protective orders against them.

The Vermont bill passed the House in January and is currently under review in the state Senate.