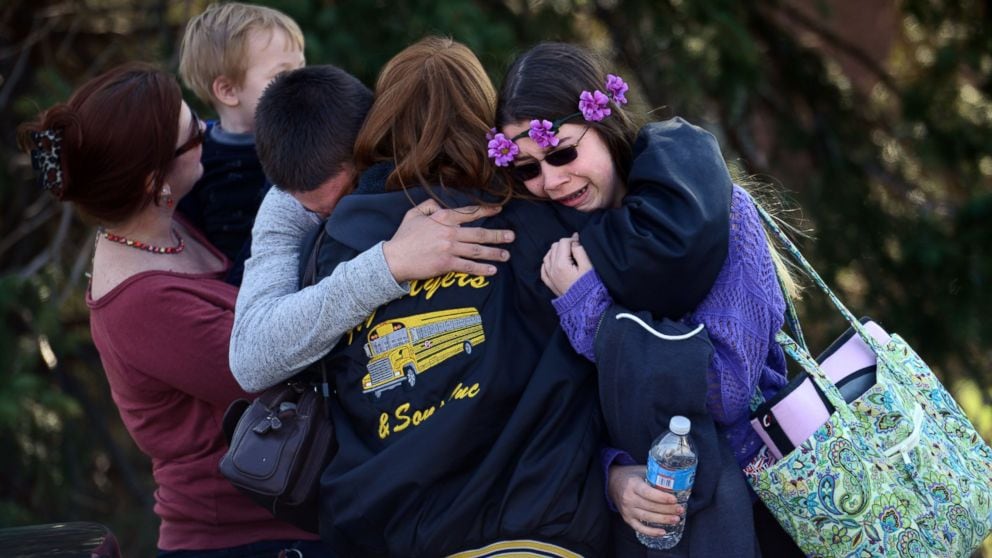 Parents and students embrace along School Road near Franklin Regional High School after a knife-wielding suspect at the school stabbed more than a dozen students on April 9, 2014, in Murrysville, Pa., near Pittsburgh. (Photo credit: Sean Stipp/Tribune Review/AP Photo)

The familiar ritual that is the early morning rush through the halls of one U.S. high school was shattered Wednesday following a stabbing spree left twenty injured.

The incident occurred just after 7 a.m. at Franklin Regional High School in suburban Murrysville, outside of Pittsburgh. There, a 16-year-old student is now in custody following the vicious knife attack.

“Everyone was screaming and people were being trampled over,” said school Librarian Alicia Graham. “It was a very bad scene. I was very scared. I didn’t know what was happening. I thought it was a drill.”

The alleged assailant, an unidentified 16-year old, chose his victims from among the packed early morning hallways of the school and attacked them with two kitchen knives. During the attack, 19 students and one adult, the school’s security guard, were injured.

Of the injured, four are reported to have suffered serious wounds and at least two of those are currently listed in critical condition.

Quick action from Sam King,  Assistant Principal at Franklin Regional High School, according to reports, helped stop the mass stabbing on Wednesday by wrestling the student to the ground. 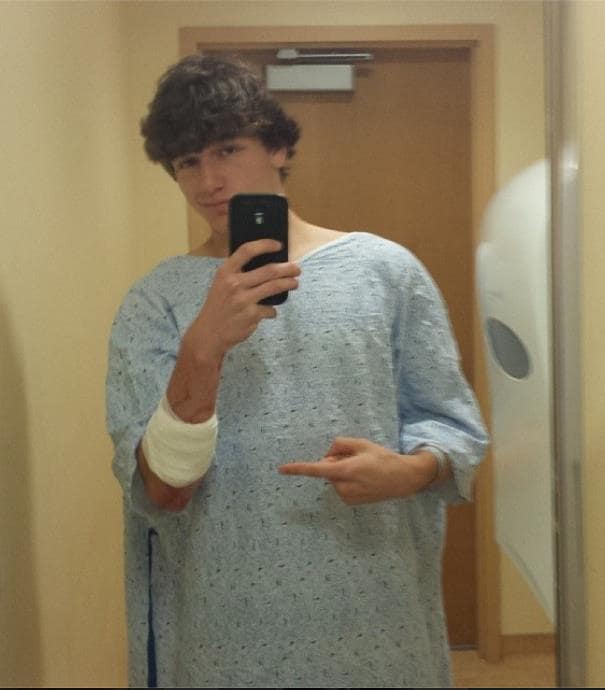 Franklin High student Nate Scimio, credited by many as sounding the school’s fire alarm during the incident was, as seen by this image, also a victim. (Photo credit: Instagram)

“The alarm went off, and students started rushing outside, the security guard outside rushed in, and came upon his supervisor, and a vice principal who had the suspect in custody on the ground and was trying to control him, and try to get the weapons away from him,” said Jeff Dahlke, spokesman for the security company that provides officers to the school.

That alarm was apparently triggered by an early hero of the event, 16-year old student Nate Scimio, who was wounded in trying to defend other students from the assailant’s attack.

“(Nate) took the stab right in his arm and saved my friend and me,” Franklin Sophomore Trinity McCool said. “I’m pretty sure it was his instinct. He didn’t want anyone to get hurt. He told everybody to run away.”

A seemingly nonplussed Scimio then posted a hospital selfie of his bandaged arm on social media.

Pennsylvania has had the prospect of letting school boards decide on arming teachers for months. In 2013, lawmakers introduced Pa. Senate Bill 1193, and House Bill 122, that would allow trained and licensed personnel to carry weapons on school property.

“With the legal authority, licensing and proper training, I believe allowing school administrators, teachers or other staff to carry firearms on the school premises is an options worth exploring,” said state Sen. Don White, (R-Indiana) about the legislation last December.

With this latest incident, you can rest assured that the debate on how to handle violence in schools is just beginning.