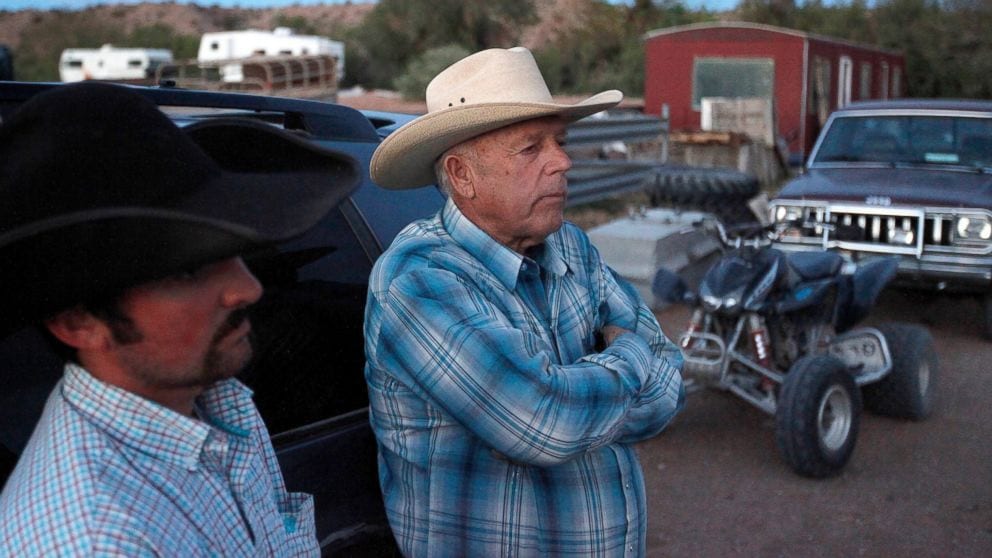 The Bureau of Land Management has assembled a task force to confront a Nevada rancher over the endangered desert tortoise and grazing of his cattle.

This fight is the latest in a 21-year running battle between 68-year-old Cliven Bundy, the National Park Service, the Center for Biological Diversity and the courts over just where his cattle can graze in Bunkerville, Nevada, about 80 miles northeast of Las Vegas.

At one point in time, ranchers had the right to lease land from BLM to raise cattle, but the practice ended in 1998. However, Bundy claims that his family has raised cattle on the land since 1887, predating the 1934 regulation that makes the BLM the caretaker of area called Gold Butte, located near the Utah border. Bundy has a herd of 900 cattle grazing on a 600,000-acre area at stake. 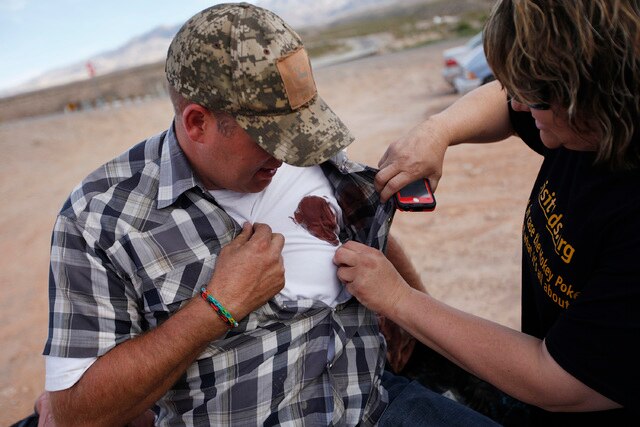 The government and Bundy have been embroiled in legal proceedings since the BLM canceled his grazing permit to the area in 1994.

Unperturbed, he has allowed his cattle to graze the area ever since. Then, in 2013, the U.S. District Court for the District of Nevada ordered Bundy to remove the cattle within 45 days, which he did not.

This prompted visits by Department of Homeland Security officials and local sheriff’s deputies, who interviewed Bundy’s neighbors to determine any possible threat.

On April 5, the BLM, with a force of armed agents, helicopters, contract cowboys and support personnel, began impounding what they term “trespass cattle.”

This led to reports of government ‘snipers‘ camped out in the desert and Bundy’s son, Clive, being arrested by officers. He was later released and issued citations for failing to disperse and resisting arrest.

Thus far, no shots have been fired, but Bundy’s other son Ammon was tasered by BLM law enforcement officers while protesting the roundup.

“Impoundments of livestock are done only as a last resort,” the BLM posted on its website, which has a running total of trespass cattle impounded from land under its control. As of April 9, the agency has captured some 352 animals. 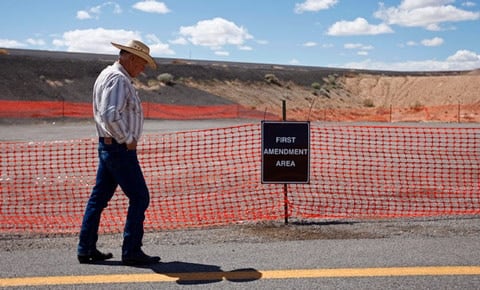 Cliven Bundy walks by a first amendment area set up by the Bureau of Land Management near Bunkerville, Nevada. (Photo credit: AP)

Explaining its actions, the BLM elaborated, “In this case, the BLM and the National Park Service have made repeated attempts to resolve the matter with Mr. Bundy administratively and judicially for over 20 years.  Mr. Bundy has also failed to comply with multiple court orders to remove his cattle from the federal lands and to end the illegal trespass.”

They contend that Bundy owes the government more than $1 million in back grazing fees incurred over the past 20 years. The BLM also claims that Bundy’s cattle are harming the federally protected endangered desert tortoise as they maintain his animals deplete food sources with that native turtle.

This in turn has led Bundy to call on Clark County Sheriff Douglas Gillespie to start arresting BLM agents on charges of trespassing and theft.

The reaction in Nevada has been overwhelmingly against the BLM and in support of Bundy. Almost immediately, protesters began assembling around the Gold Butte area. The BLM has set up zones designated as “First Amendment Areas” for protestors to congregate in.  On Thursday, at one of these areas things turned ugly, with police dogs and tasers being deployed.

Nevada Gov. Brian Sandoval called the roundup “intimidation” and asked publicly that the BLM reconsider its approach. Meanwhile Sen. Dean Heller (R-NV) has also criticized the actions of the agency in the Bundy case, calling them “overreaching.”

Bundy is refusing to bend, even going so far as to call for a “Range War.”

“Years ago, I used to have 52 neighboring ranchers,” Bundy said. “I’m the last man standing. How come? Because BLM regulated these people off the land and out of business.”