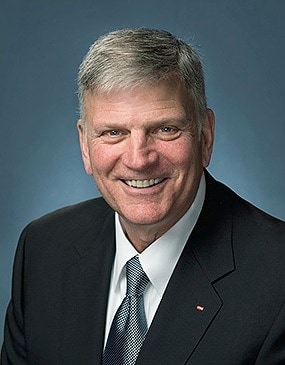 A vocal supporter of universal background checks is slated to be the keynote speaker for the Prayer Breakfast at the National Rifle Association’s annual convention later this month in Indianapolis.

Rev. Franklin Graham, son of America’s Evangelist Billy Graham, is going to be headlining the Sunday morning event, which is designed to “encourage and enrich your Annual Meeting experience,” according to the gun lobby’s website.

What’s interesting about the choice of Franklin Graham is that he backed President Obama’s call for expanded background checks in the wake of the mass shooting at Sandy Hook Elementary School in Newtown, Connecticut.

“As ministers, we agreed together that we could stand on a united front for universal background checks,” Graham told Time in March of 2013, adding that he had many deliberations with fellow Christians and civil rights activists on the subject. “We think that’s reasonable and responsible.”

One will recall that the NRA vehemently opposed expanded background checks on firearm transfers or sales between private buyers and sellers and successfully, with its unmatched lobbying prowess, convinced enough senators to vote against the bipartisan expanded background check amendment, sponsored by Sens. Joe Manchin (D-WV) and Pat Toomey (R-PA) last April.

The Manchin-Toomey amendment, which would have required all gun transfers made over the Internet or at gun shows be subject to background checks, fell six votes shy of the 60 needed to overcome a GOP-led filibuster.

While it’s not clear if Graham specifically supported the Manchin-Toomey amendment, it is clear that he backed UBCs as well as other efforts to curtail gun-related violence, such as improving the mental health system and going after violence portrayed in video games and on TV.

“There are millions of people that we can mobilize behind something like this, but it takes leadership from the White House,” Graham told Time.

As one who follows the gun debate rather closely, I’m not sure what to make of this. On one hand, it could be a deliberate move by the nation’s gun lobby to tacitly show that there is diversity of opinion on certain gun-related issues and that the NRA is tolerant and welcomes different voices all along the pro-gun spectrum.

On the other hand, it could just be that the NRA never really thought about it or that they figured since it’s a prayer breakfast and not a political forum, it doesn’t really matter what views or positions Graham holds on gun ownership.

I reached out to the NRA for an answer, but they have yet to respond.

“We’re happy to see that the NRA invited Reverend Franklin Graham to headline the prayer breakfast at their annual meting this year. Like the overwhelming majority of Americans — including 74 percent of NRA members — Reverend Graham supports universal background checks,” said Erika Soto Lamb, the group’s communications director, in an email to Guns.com

“We hope Reverend Graham will use this opportunity to remind NRA leadership — given that they used to support background checks — that support for Second Amendment rights goes hand in hand with keeping guns away from criminals and other dangerous people who shouldn’t have them,” Lamb concluded.

What do you think? Is this a big deal or nothing to sneeze at?