Over the past 60-odd-years, if you needed a reliable rifle for open warfare, the AK has often been the go-to choice. Well things have changed since 1946, there’s no doubt about that, and in recognition of—errr, progress?—the Russians rebooted the line and came up with the AK12. 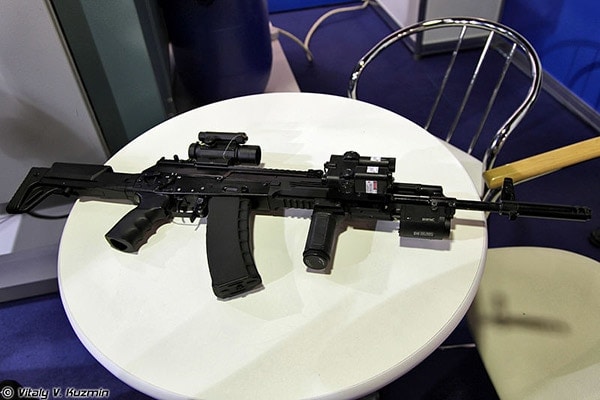 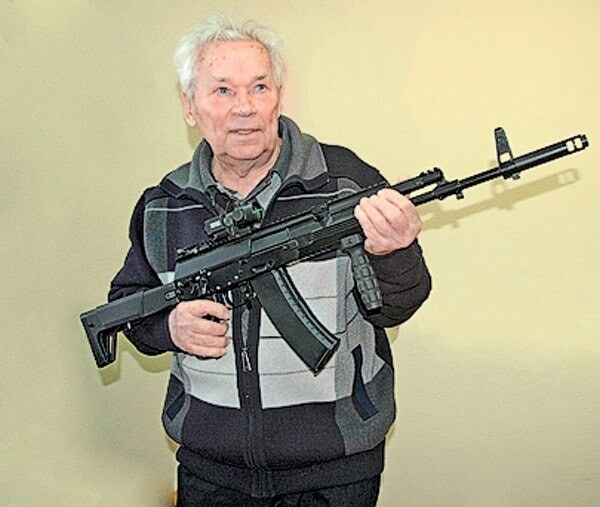 It’s not officially an AK unless Mikhail gets in the family portrait.

With its stamped sheet metal receiver, thirty round detachable magazine, brutal good looks, and undeniable effectiveness in combat situations, the AK is arguably the king of the assault rifles. More than a 100 million of these guns have been made around the world, leaving satisfied customers on almost every continent (we haven’t seen penguins with AKs yet, that’s why we say almost).

The thing is, even purists acknowledge the design of “the gun” is pretty darn old school.  Easy to learn but tough to master, a full auto AK is unapologetically gritty with more thought put into the efficient functioning of the gun in a rain puddle than on its ease of use by the shooter. Let’s put it this way for you gearheads—while a car made in 1946 is a classic, would you want it as the car you drive everyday?

The same concept caught up to the AK47 not too long after its introduction really. It was improved as the lighter and simplified AKM in 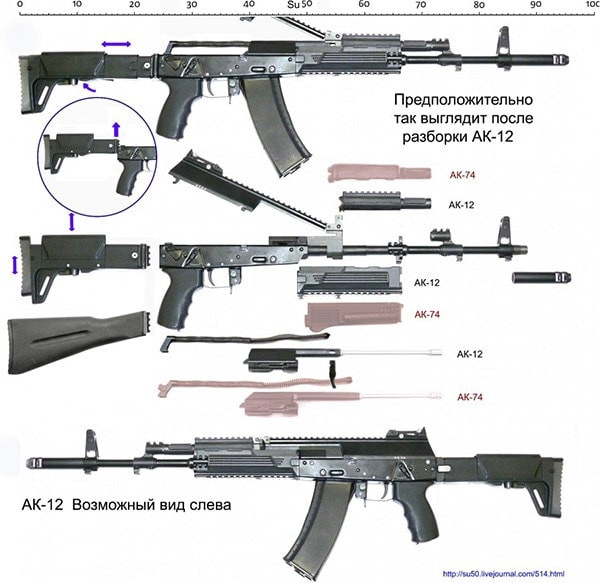 Chart showing the difference between the AK12 and the AK74.

Nevertheless, if you take an AK47, AKM, and AK74 and break them down, they all still use the same gas-operated action for firing and reloading built around a rotating bolt. They all have a similar layout; similar sights, the same field strip procedure, and require the same manipulation. Even the wooden stocks are nearly identical. Sure, the AKM uses a slanted muzzle break, and the AK74 is a completely different caliber with orange looking plastic magazines, but this is just nit picking.

Then in the 1990s, the Cold War ended and the AK 74 itself needed some modernization. Besides the retro look, it was the last new production combat rifle in the world that used wooden furniture. This led to the plastic stocked AK74M in 1991, which in turn was reworked and cloned as a host of export rifles. These ‘100-series’ guns (the AK101, 102, et al) were produced in NATO’s 5.56mm, classic 7.62×39, as well as 5.45mm not to defend the Motherland but to sell abroad for hard cash. In their embrace of capitalism, Russians had discovered their venerable AKs would sell very, very well overseas. 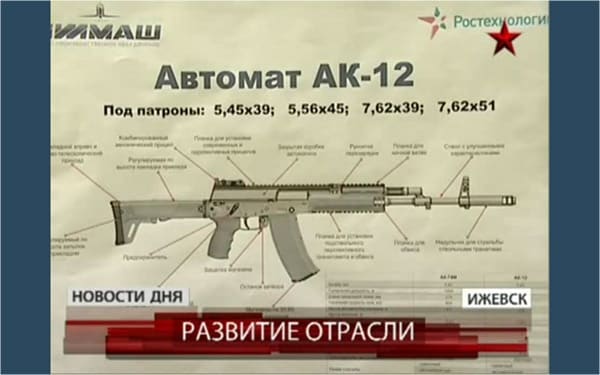 This lesson led to the gun we today call the AK12. 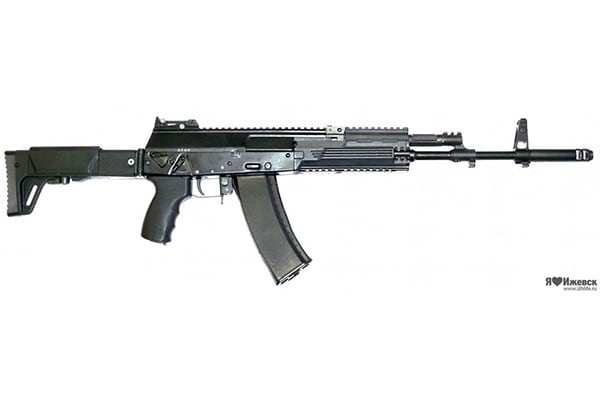 The AK12 in its most basic form.

When you consider that the AK47 was adopted in 1947 (though not produced until 1956), and the AK74 was designed in 1974 (though not produced until 1978), it’s easy to see that Avtomat Kalashnikov Model 12 was designed in 2012 and produced subsequently. And while we can’t confirm it, we have a nagging suspicion that Izmash looked to the West’s interpretation of the AK series for inspiration. 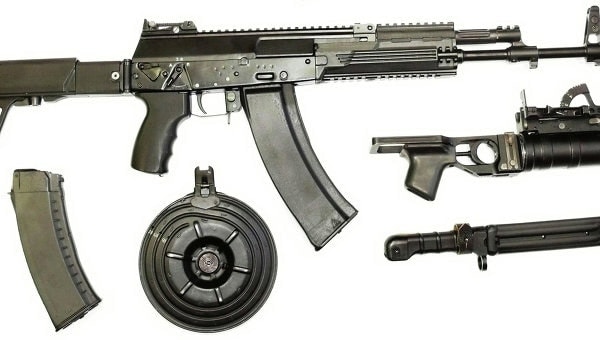 When you look at the AK12, it reminds you not so much of Papa Kalashnikov’s AK47, but rather of the Israeli Galil and Finnish Valmet. For those of you who don’t know, Yisrael Galili for the Israeli Defense Forces designed the IMI Galil in the early 1970s. He took the AK47, shrank it down to fire 5.56mm NATO, and improved the controls. This successful gun itself borrowed from the earlier Finn Valmet Rk 62, which was a high quality AKM with plastic furniture and a folding skeletonized buttstock. Remember, both the Finns and Israelis did this before the AK74 was even on the drawing board. 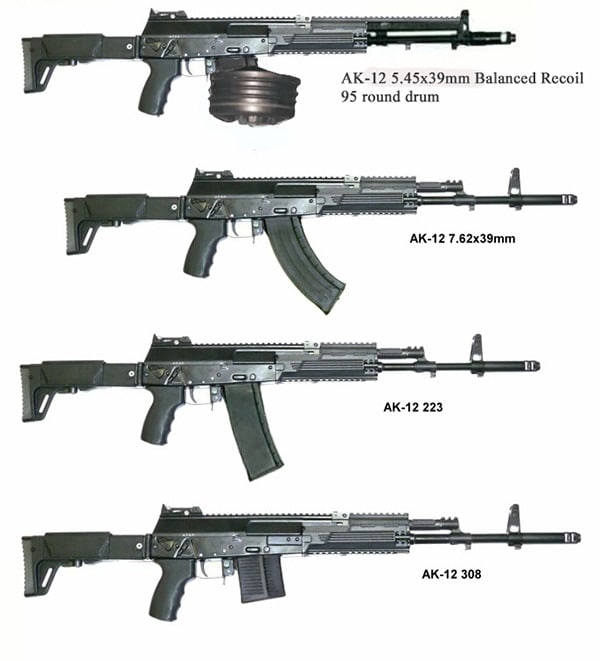 Lots of flavors in the AK12 line. 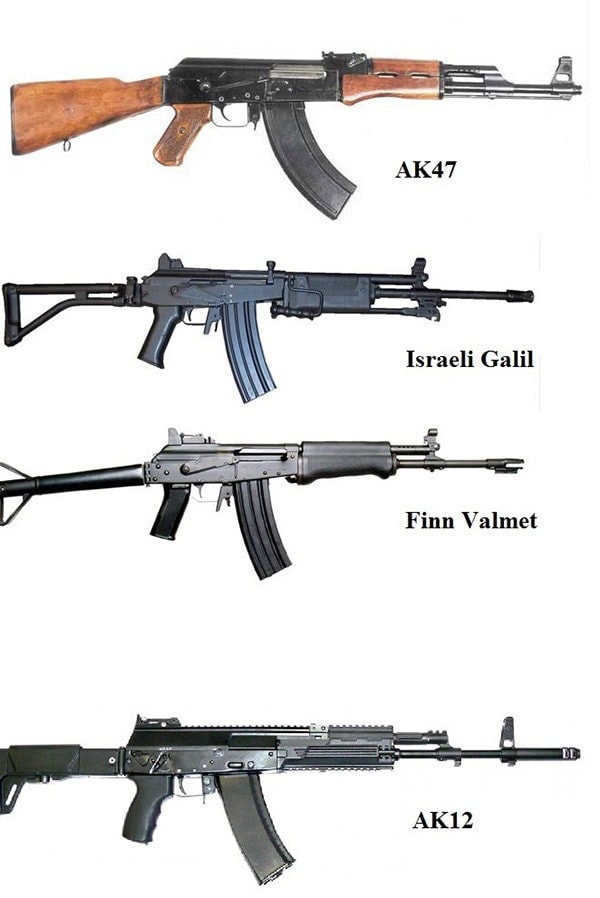 The AK12 seems to have more in common with the Galil and the Valmet than the old AK47.

Both the Galil and Valmet are whole-hearted clones of the AK on the inside, but look as western as can be on the outside. On US-made semi-auto AKs that have come off assembly lines for the past decade, Picatinny accessory rails, the provision for optics, and other all-American tacitcool gear has been standard. With these two concepts in mind, the AK12 seems to have evolved in equal parts from both.

It looks as if the Russians took the Galil/Valmet, coated it in as many rails as would fit, and called it a day. They even added the capability to quickly attach/detach suppressors, fire 22mm NATO standard rifle grenades (um, like the Galil), and in select-fire models have given it a three-round burst. The ejection port and surface controls can be made ambidextrous, a universally appreciated feature.

Will it be adopted? 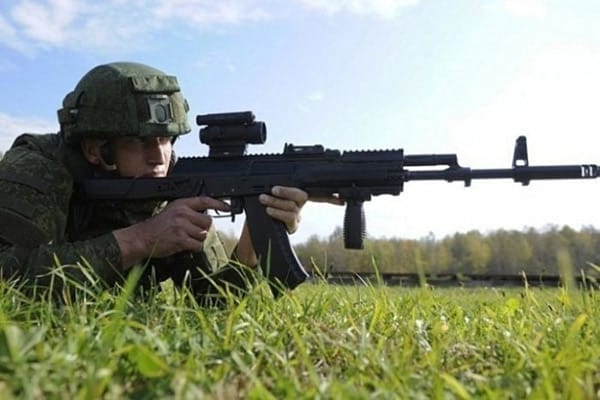 Testing of the AK12.

Well that’s the thing. The official line is that the Russian Army for potential adoption tested the gun in June 2013. Then came the announcement last month in the Russian media that the Army will start getting new Kalashnikov rifles in 2014 with no mention of quantities, even though the AK12 had issues when tested.

The Kalishnikov Concern is still churning out AK100 series and AK74M rifles, while still trying to promote its new baby… 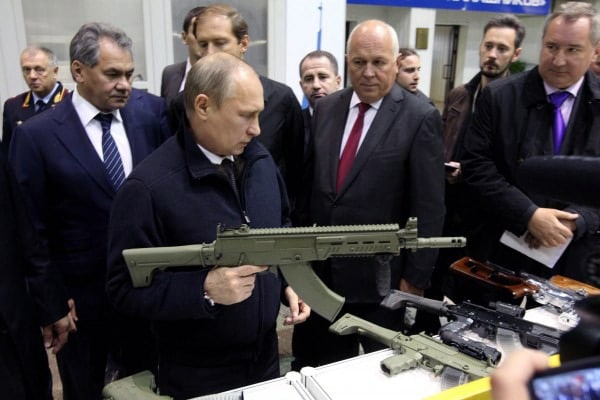 Tsar Putin checking out the new line of AK12s at Izmash (errr, Kalashnikov).

Vladimir Putin has recently been photographed mugging with new AK12s complete in cerekoted-ish finishes, ranging from mint green to off orange and clear SIG SG550 style mags, but as with much of what happens in Russia these days, it may just be smoke and mirrors.

Izmash isn’t as fluid as you would think. They are struggling to the point that they just did a major rebrand of their entire company, calling itself the Kalashnikov Concern. Besides that, the Russian military is sitting on hundreds of thousands of paid for AK74Ms and AK74s that—while they aren’t as cool looking—can still get the job done.

How do you get yours?

The 1996-era Clinton Arms Embargo on Russian made guns only allowed a few rifles into the US by name. These are mainly bolt-action guns and precision biathlon rifles in .22LR and if it is not on the list, it is not coming into the states. Since the AK12 is a new gun, its 100% sure not to be on that 1996 list. With that being said, unless it can be made locally under some sort of partnership with the Kalashnikov Concern, the best you can do is get a nice US-made AK and trick it out. 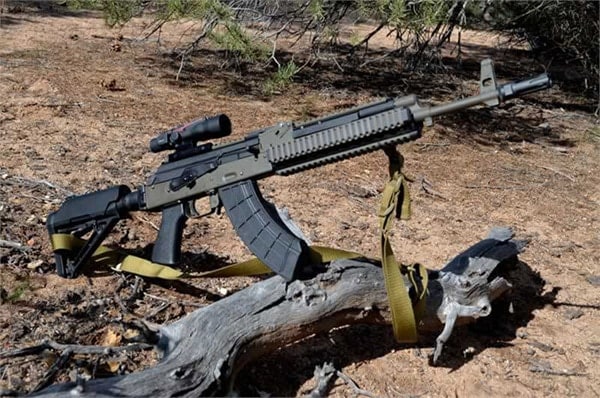 Tricked out semi-auto AK clones have long been popular in the US and will continue to hold the market here… unless the AK12 gets made locally.

Then again, there are always good deals on Galils out there too.