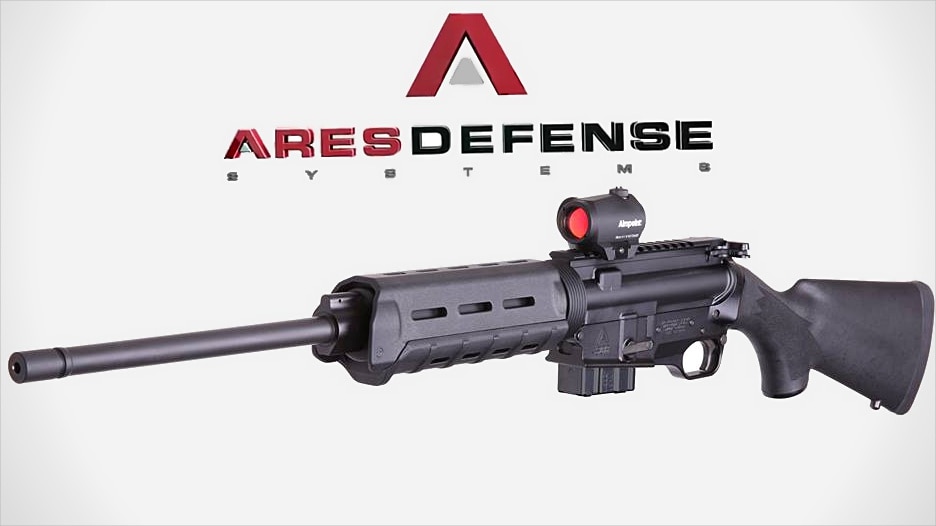 Ares Defense Systems, better known for their modular, piston-driven belt-fed uppers for AR-15 and M16 lower receivers, is about to launch a new rifle that will make a lot of people happy. Called the SCR for Sport Configurable Rifle, this “featureless” AR is perfectly legal in all 50 states.

The SCR is not technically an AR. It’s a pistol grip-free rifle that accepts AR-15 upper receivers. This gives users the ability to have all of the benefits of AR uppers, the huge amount of aftermarket support, precision barrels and free-floating handguards all in a package that fits in same box as your gradpa’s hunting rifle.

The SCR uses a modified bolt carrier with an extension that drops into a recoil tube inside the stock, similar to some semi-auto shotguns. The bolt carrier is proprietary but the bolt itself is standard. We will know more about the rifle when it is officially unveiled at the NRA Annual Meeting.

“The Ares SCR accepts virtually every AR upper receiver assembly and caliber that is currently practiced on an AR platform, except it must use our proprietary bolt carrier to work with the lower,” explained Ares on their Facebook page. “So this means that a customer can take their 6.5 Grendel, 300 Blackout, .50 Beowulf, etc. and put the bolt into our carrier and they can have this rifle in that caliber and configuration of their upper mated to our lower.”

The design is not entirely new. Announced a few years back as the Herring Modular Sporting Rifle or MSR, Ares Defense unveiled a prototype at the 2009 SHOT Show that never went into production. With several states adding new restrictions on AR-15 rifles, there’s a larger market than ever for a hybrid rifle like this than ever before.

That doesn’t mean that the SCR only appeals to restricted markets. The traditional design has a lot going for it as far as hunting and benchrest shooting is concerned. This will give the non-tactical shooters out there an AR-like option, again with all the benefits of the Stoner design as far as the upper is concerned.

It will appeal even more to that market once  the wood stocks roll around.

“We currently have two additional stock offerings beyond what is shown above. One is a short-pull Sporter profile as shown, but with a 12-inch pull and the other is a Monte Carlo design with elevated cheek rest for higher optics,” stated Ares.

“We do plan to bring wooden stocks to the table for this platform and we are already working with vendors on this, but it may be several months before they’re actually on the sell list.”

The rifle naturally uses standard AR-15 magazines, which is a huge plus.

Ares has not listed any specifications but they have said that the rifle pictured weighs just 5.7 pounds.

We can’t wait to learn more about the Sport Configurable Rifle and look forward to getting one for testing. This is an impressive design and a promising solution for shooters who have to deal with strict gun regulations.