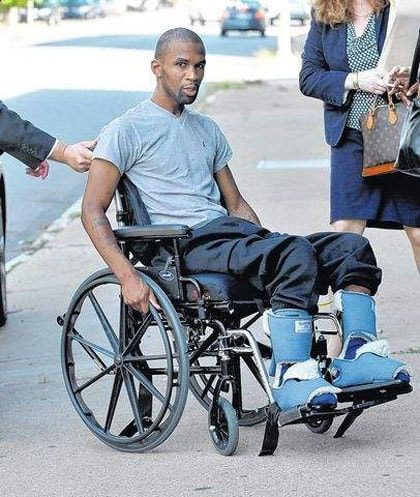 James Rankin allegedly suffered emotional distress while being pursued by police after a violent home invasion and is now paralyzed from the waist down after being shot by the police. (Photo credit: The Dallas Post)

A suspect awaiting trial for a violent home invasion in Wilkes-Barre, Pennsylvania, back in 2012 has filed a lawsuit against more than a dozen officers involved in his arrest and is seeking monetary compensation of nearly half a million dollars for the physical and emotional damages caused to him by the officers.

Just before 4:00 a.m. on April 9, 2012, 23-year-old James Rankin broke into an apartment occupied by Naeem Ford and Margarita Martinez. Martinez confronted Rankin, called 911 and a fight ensued between the three before police arrived.

According to the victims, Rankin repeatedly used a stun gun on them, up to 20 times, Martinez told police. In addition, Rankin also hit them both, beating Ford so badly that he bent a titanium rod which had been placed in Ford’s leg following surgery for a broken femur.

When police arrived at the apartment, nearly an hour later, Rankin fled from a third-story window and a foot pursuit with police followed. Rankin said in his complaint that the officers had him “boxed in.” Officers believed at the time that Rankin was armed because that’s what Martinez thought and had told the 911 operator.

According to the officers involved, who were from three separate police departments, Rankin ignored repeated commands to put his hands up. And when he started reaching towards his waistband, one officer, fearing that he was armed and grabbing for his firearm, shot Rankin once in the torso.

No gun was found in Rankin’s possession. However, during the foot pursuit, Rankin dropped various items, including those taken from the apartment he broke into, as well as the stun gun he used on the victims.

After receiving medical attention, Rankin was arrested and now faces charges for aggravated assault, robbery and possession and use of an electronic incapacitation device. However, he currently remains free on bail and – two years later – is still being treated for injuries related to the gunshot wound.

The gunshot left Rankin partially paralyzed from the waist down and in his complaint he also claims that he experienced second-degree burns that required skin graft surgery, bed sores, kidney failure and extreme weight loss due to the injuries surrounding the gunshot wound.

The Wilkes-Barre police officer who shot Rankin was cleared of any wrong doing by the District Attorney following an investigation with the state police.

However, Rankin claims that the officers used excessive and unnecessary deadly force against him and that there were other, less lethal, means that they could have used.

Rankin’s attorney, Jack Bernard, stated in the suit, “At no time did plaintiff, James Rankin, possess a gun or pose a threat to the defendants.”

In addition, Rankin claims that the officers involved “falsely announced to and amongst each other” that he was armed with a gun, which ultimately led to him being shot.

But Rankins also claims that the officers harassed him even before he allegedly broke into the apartment and beat the couple inside.

The day before the break-in, officers found Rankin hiding under the porch steps of a residence and allegedly told him to “immediately leave town” or they would shoot him. Rankin described the incident as a “frightening experience.”

Rankin is now seeking $150,000 for each count in his three-count lawsuit for a grand total of $450,000. The lawsuit alleges civil rights violations, assault and battery and intentional infliction of emotional distress.