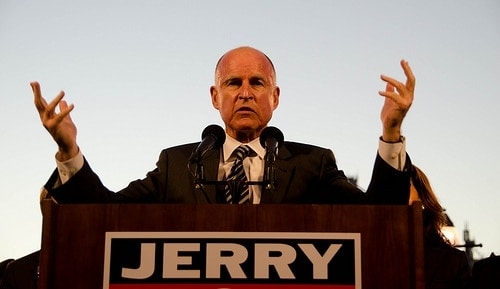 With gaining momentum for shall issue in California, there are now renewed calls for open carry to make a comeback as well.

The practice, which was regulated away 4 years ago after a series of public events by open carry advocates brought retribution from lawmakers, is seen by many as ready for reinstatement in the Golden State.

“That’s the next logical step in the evolution of gun rights in California,” Sam Paredes, executive director of Gun Owners of California in Folsom, told the San Francisco Chronicle.

He said that open carry gatherings “have died off because they were squelched and our people are law-abiding. But that doesn’t mean we’re not preparing for the next round, which is the courts.”

Current California law prohibits open carry in all but rural areas (see People v Knight) whether the weapon is loaded or unloaded.

Up until 2011, open carry was legal in the state as long as the firearm was unloaded. However, in that year Gov. Jerry Brown signed AB144 into law that closed even that narrow window. 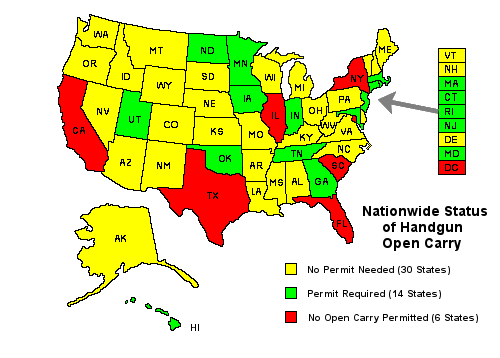 California is one of just six states that have an all-out ban on open carry. (Photo credit: Open Carry.org)

Violations of the law carry a fine of up to $1,000 and up to six months in county jail.

New blood was pumped into the fight for open carry in California following the Feb. 14 opinion from the U.S. 9th Circuit Court in Peruta v San Diego. In its 132-page finding, the court acknowledged that “to ban both the open and concealed carriage of pistols ‘would be to prohibit the bearing of those arms’ altogether.”

“Very few gun owners want to carry openly displayed guns. The police hassle you, stores refuse to serve you and some people won’t talk to you. Criminals might even target you, seeking to steal your expensive sidearm,” Winkler wrote.

Winkler also wrote of open carry as having a universal adapter. “Under an open carry law, the state could still require a license, so long as it’s generally available to law-abiding adults. Counties with large cities, like Los Angeles, Orange and San Diego, could keep their more restrictive licensing requirements for concealed carry.”

Still, those in the gun control community are not impressed by the concept of increased carry of firearms in any form in California.

“The gun lobby can’t win this fight through the democratic process, so they are trying to overturn the will of the people in the courts,” said Cody Jacobs, staff lawyer for the Law Center to Prevent Gun Violence in San Francisco. “However, they won’t succeed.”

According to OpenCarry.org, California is one of only six states where open carry of unloaded guns is prohibited.